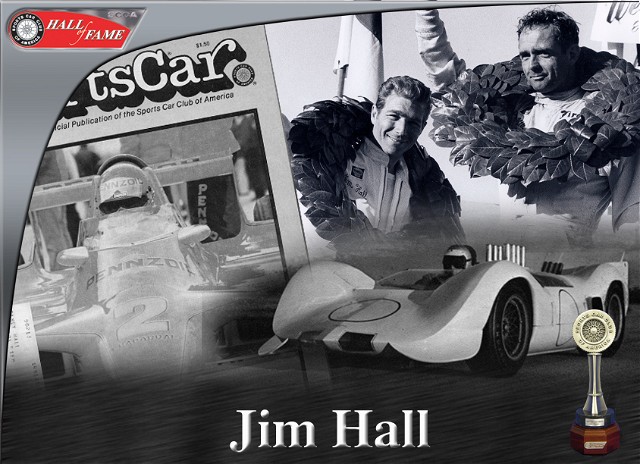 Jim Hall - Jim Hall was a founder and charter member of the West Texas Region of the SCCA in the 1950s.

He was a competitor in club races which lead him to become an international competitor of some note. His early involvement led him to later become an entrant and constructor where he brought great attention to SCCA by becoming the leading innovator in race car designs.

We all think of his innovations primarily as aerodynamic but it's so much more than that: ground effects, tires, transmissions.   Putting this all together to make for some really fast cars.

During this time he built a race track near his shop in Texas for testing purposes and made the track available to the regions for club races.

His biography from the Road Racing Drivers Club:

"Jim competed in Formula One from 1960 to 1963, participating in 12 Grand Prix and numerous non-championship races. His place in motorsport history came as the owner and driving force behind Chaparral cars in Midland, Texas, during the '60s the United States Road Racing Championship and later the CanAm. His Chaparrals were the most innovative cars in racing. He was an early adaptor of aerodynamics to race cars and the leading proponent of that technology for an entire decade."

His innovations outstripped the ability of the sanctioning bodies to keep up. He stepped away for a few years but came back as a driver in some TransAm events. Then returned to prominence as a team owner in CART and Champ Car Racing winning the Indianapolis 500 with his cars in 1978 and 1980.

He's been a President's Cup recipient and a member since 1957. He still works with the region on support and recruitment.

Think about the development of race cars before Jim Hall. It was fairly slow and fairly stable. He and his team created an explosion of innovation and evolution.

If you get to Midland, Texas, there is an entire wing of the Petroleum Museum there devoted to Jim Hall and Chaparral.

His efforts, his fame, his successes captured so many of us. Like so many of his contemporaries who went on to the pro racing world, Jim captured our imaginations and made all of us susceptible to that eureka moment when we discovered that SCCA was for us.