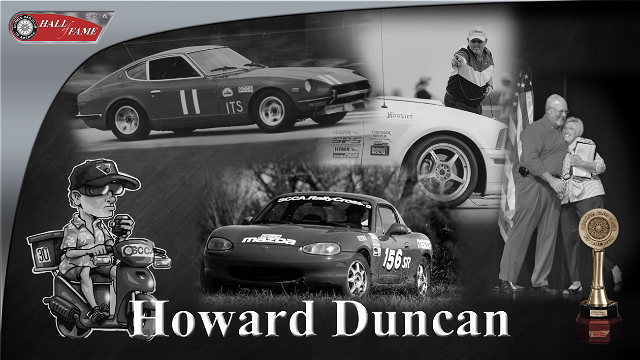 The easy answer to Howard Duncan’s legacy is the more than 30 years as the driving force behind the birth and the growth of the National Solo program. But SCCA his legacy goes even deeper than that.

Yes, his most visible role was as the leader of the Solo program, for good reason.

Under his 30 year guidance as an SCCA staff member, the National Solo program moved into the major leagues by developing high-quality, long-term event sites and building an immense volunteer team. This process has helped the Solo National Championship event to grow from 500 entries in the mid-1980s to a record 1,375 entries in 2018.

Howard was instrumental in securing, and then maintaining, SCCA’s longest-running partnership with the Tire Rack. In addition to their nearly synonymous pairing with SCCA autocross, Howard and Tire Rack were instrumental in bringing the Tire Rack Street Survival program to the SCCA, helping teens become safer drivers on the street.

In addition to his impact on the Solo program, Duncan was a strong supporter of the RallyCross program in its early years and for the first 10 years was one of just a handful of competitors who had attended each and every RallyCross Nationals.

As a staff member, he was one of the originators of the SCCA Hall of Fame – the same Hall of Fame that he is now a member of.

Away from work, Howard’s main hobby remains cars. He’s been an autocross competitor, and RallyCross competitor, and has been known to get behind the wheel – given the choice, most often in a Miata – on a race track for track days, time trials and the occasional road race.

His work has been recognized previously as the 2014 Woolf Banarto Award winner, unprecedented for an SCCA member who earned the award primarily for his work as a full-time employee.