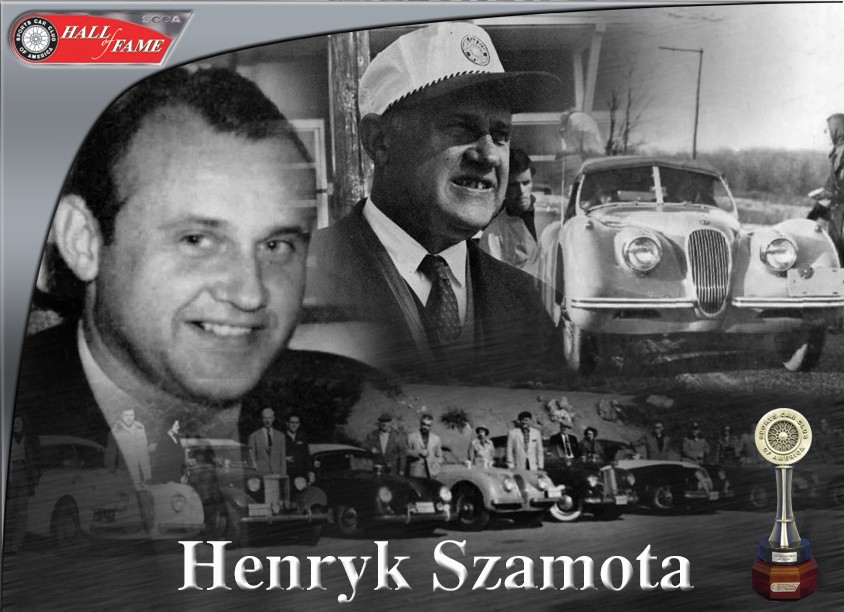 Szamota was born in Poland and competed at a high level in many sports, becoming the Polish National Bicycling Champion before World War II pushed him into active duty as an officer. When France fell, Szamota emigrated to the United States, where his competitive juices were stoked once again by the world of auto racing.

Szamota’s SCCA dreams began as a competitor in both Rally and Road Racing. A two-time rally champion in the New York Region, Szomota was involved in a terrible crash at Elkhart Lake in his road racing car. The injuries he sustained in that accident ended his driving career. That incident only cemented his passion for the Club, however, and began a progression of roles and responsibilities in the New York Region and beyond. Szamota began as a race chairman, became assistant Regional Executive, and then served as RE for many years. While active, Szamota contributed personal funds on multiple occasions to help keep the Region afloat. Szamota is also credited with the founding of the North Atlantic Road Racing Championship, run collectively by the New York, North Jersey, Mohawk-Hudson and New England Regions through 2016, setting a foundation for inter-regional cooperation with the Northeast that remains today.

Szamota’s largest stage came when he was elected to the Board of Governors. Despite serving 14 years on the Board, Szamota recognized the need for fresh leadership within the club and pushed hard for the two-term limit that remains today. Always ready to lend a hand, provide expertise or physical resources, Szamota was recognized as a Woolf Barnato Award winner In 1977 for his leadership. Szamota remained a valuable member of the club until his passing in 2002.