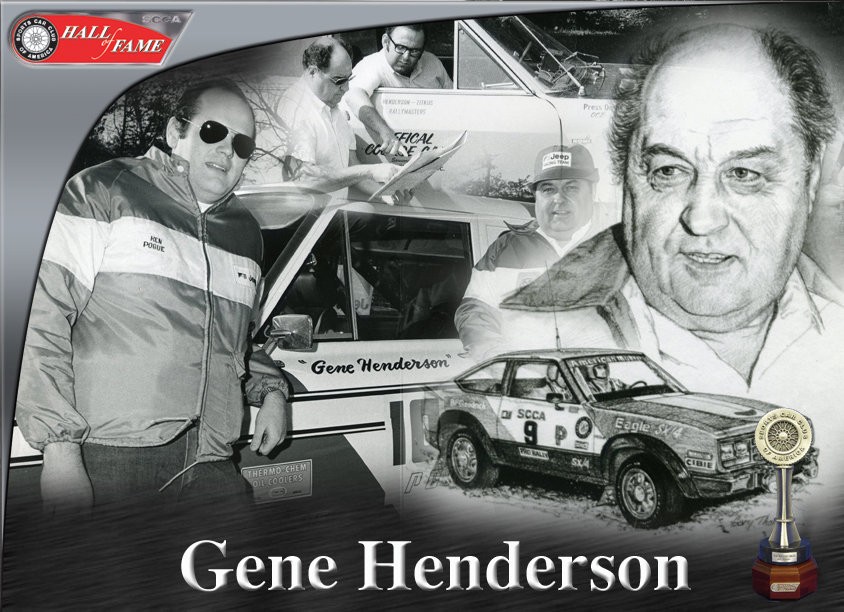 Gene Henderson was extraordinarily proud of his Naval service beginning in 1943 joining with General MacArthur on his return to the Philippines.

When Gene Henderson got home from the War, he and his brother-in-law were looking at the help-wanted ads and saw the Dearborn, MI, Police Department was looking for officers and off he went for a long and illustrious career with the Police.

His competition started with track events but we remember him most for his rally involvement. He was a four-time winner of the Press-On Regardless Rally. A 45-year member of the SCCA. He did club racing early in his career, competing in various vehicles and finally a Ford Cortina.

In his 1967 racing season, he won 10 of 12 National Races. He went from amateur status to competing in one of the early TransAm races at Mid-Ohio finishing fourth in class with co-driver Peter Quenet.

During Gene's early rally career, he would drive for factory teams; Mercedes, Chrysler, American Motors. He teamed with Scott Harvey on a Plymouth Valiant rally team in a Monte Carlo Rally in Europe. He finished fifth!

He ran the Shell 4000 Canadian Rally six times. In 1969 he commanded a five-car rally team of stock Ford Mach 1 Mustangs to run the National TSD Rally schedule and took the Team Prize for his efforts.

Gene's greatest effort would be competing and winning the 1972 Press-On Regardless Rally with navigator Ken Pogue. This was an FIA World-Championship Event. His sponsor was American Motors. What do you think he won it in? A Jeep Wagoner called "Moby Dick". An astounding accomplishment against the European teams with some of their small, light, rally cars. That certainly showed the way for the future of Pro Rallying, and forest rallying with four-wheel drive.

After retiring from professional racing and the rally program, he stayed in with high-level TSD events like One-Lap of America and Alaskan events, the Rally of the Lost Patrol, the Al-Can 5000, National/Regional TSD events around the country.

Gene was inducted into the Michigan Motorsports Hall of Fame in 1989.

As a police officer, he ended up being a sergeant and there are lots of stories about Gene running down speeders in cars they thought were never going to be caught.

Highly respected in everything he did as a competitor, as a policeman, as a business man, and as a father. He's an amazing guy and I've just scratched the surface with what I've tried to talk to you about.