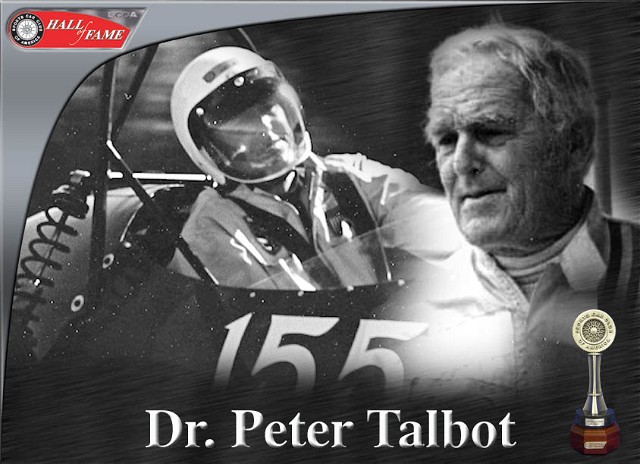 Dr. Peter Talbot was born in 1918 and attended Columbia University and became an obstetrician and gynecologist. He practiced in the Menlo Park in Stanford, California.   His first race was in Reno in 1953 driving an MG TD. He ran lots of different cars and lots of different tracks and was heavily involved as a driver. He picked up on a need and expanded on a need for safety, specifically Laguna Seca.   Laguna Seca was going to lose their FIA Safety License. He expanded on the use of tires as safety barriers and Laguna Seca kept their license.

About the same time the street race at Long Beach came along and even before the Laguna Seca installation, Chris Pook contacted Dr. Talbot, got him to come up and look over the situation at Long Beach, and design "spherical elastic attenuators", a Tire wall.

This look toward the safety of our drivers was so typical of Dr. Talbot's outlook.

As the historic races started in Monterey, the first running of historic events, Dr. Talbot was the Chief Steward and he set the standards of expected driver conduct. It's a whole another world when you're dealing with cars as valuable as what you see in historic museums, and yet you're still dealing with drivers whose focus on the track is often driven by emotion, ego, and adrenalin. His ability to instill expected standards of conduct in those historic races made that series and that program viable. Had it not been for his insistence on drivers displaying integrity on the track that series could never, ever have survived.

In recognition of his many years as Chief Steward of the Monterey Historic, the steward’s room at the top of the track at Laguna Seca is named in his honor.

In 1985 he received the George Snively Award for outstanding contributions in safety in motor sports. In 1974 he had been honored at this event with the Val Scroggie Award.