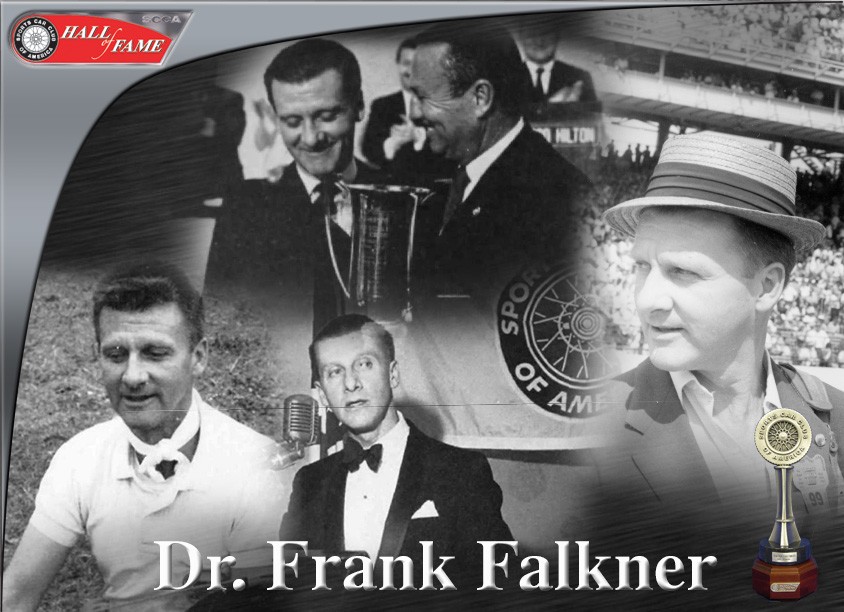 As a doctor, Falkner was world-renowned. He became a leader and a pioneer in pediatric growth and development, publishing papers and leading several major studies on child development. After earning his medical degree in London during the height of World War II and the German blitz, Falkner emigrated to Louisville where he became the chair of the Department of Pediatrics. It was there that his SCCA career took hold. Though he had been a Formula Jr. driver in England, he learned early on that his skill was in race management. Just two years after moving to the United States, Dr. Falkner had become RE of the Kentucky Region and hosted the National Convention in 1960.

Soon after its creation, he became chair of the newly formed SCCA Competition events Committee. As a part of this group, he helped introduce the Stewards program into SCCA racing and outlined the Stewards of the Meeting, their duties, and responsibilities. In 1963, Dr. Falkner was elected to the SCCA Board of Governors, and became chairman in 1966. Under his leadership, the Club evolved from an amateur-only racing organization to a Club that supported and ran professional events, including the Formula One races on US soil. His leadership was recognized at the time, and Dr. Falkner was awarded the Woolf Barnato award in 1966.

Concurrently to serving on the SCCA Board, Dr. Falkner also served as a representative to ACCUS and on the FIA commission on race safety. A professional relationship with John Cooper led to his unofficial role as team physician for the Cooper and Tyrell Formula One teams, among others. That led, of course, to a team manager role for Cooper, including the Indianapolis 500 effort that revolutionized the sport with a rear-engined configuration in 1961. How important was motorsports to Dr. Falkner? The leading pediatrician in the world scheduled his European medical conferences to tie into the Formula One schedule. Dr Falkner was also known as a mentor to many aspiring race car drivers. None, however, are more famous than suggesting to a drifting, ne’er-do-well friend of his son’s that he should consider motorsports, sending him to driving school in England. After securing a test with Tyrell, that friend – Danny Sullivan – went on to win the 1985 Indianapolis 500.