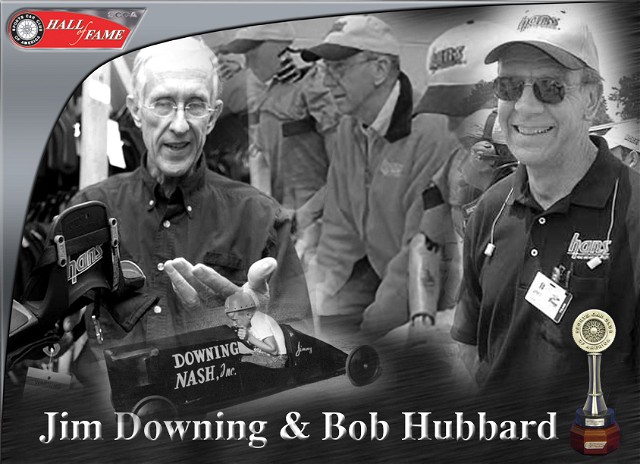 In both of their respective areas of expertise, Jim Downing and his brother-in-law Dr. Robert Hubbard were exceptional. Jim Downing grew up around cars, and is a racer’s racer of exceptional talent, both in driving and race car design. After turning 21 he raced with great success in SCCA for 11 years, then went to the original IMSA and helped found the great “Camel Lights” class. He attracted Mazda factory support and went on to score 41 career wins and 5 IMSA championships, many in cars of his own design, his legendary, howling MazdaKudzus.

When his professional career ended, the passion and lure of SCCA Club racing was still there, and he competes to this very day in SCCA competition, usually in CSR and, yes, in a car of his own design…and of course, it is powered by Mazda.

Dr. Hubbard is a retired professor of biomechanical engineering at Michigan State University, and has extensive experience and standout credentials as a biomechanical crash engineer, including in General Motors' auto safety program where his work has had significant, far-reaching effects on occupant safety.

Alone, these credentials for both these remarkable individuals are worthy of praise and recognition. But they would combine to create a device which would become a massive breakthrough in racing safety and accident survivability.

It began, sadly, with the racing death of a mutual friend, which prompted them to initiate research on a Head And Neck Support system that would afford protection for a driver and otherwise help prevent injuries associated with sudden stops and violent head movements. It is for the creation of the revolutionary HANS device, and their resulting contribution to driver safety, that Bob Hubbard and Jim Downing were nominated for induction into the SCCA Hall of Fame.

Dr. Hubbard’s first prototype was developed in 1985, and in crash tests in 1989- the first to use crash sleds and crash dummies using race car seat belt harnessesthe energy exerted on the head and neck was lowered by a phenomenal 80%.

Still, major racing safety companies declined to produce the product, so Hubbard and Downing took it upon themselves to develop, manufacture, sell and promote the HANS in 1991, and Jim, as a firm believer of the product he had helped to create, started wearing the untested prototype of the HANS Device during his IMSA sports car races.

But it wasn’t until 2001 that perhaps the global tipping point for the HANS device occurred, with great sadness, on February 18, when the legendary Dale Earnhardt Sr. was killed in the Daytona 500, which was also the 4th death in NASCAR in a 14-month span due to basilar skull fractures, which sparked a renewed awareness of the need for such a device.

Inexplicably, complete understanding and acceptance of the value of the HANS device was still a few years away, but today, finally, most major auto racing sanctioning bodies now mandate the use of head and neck restraints, and the FIA finally made HANS use compulsory for all International-level events from the beginning of 2009.

Dr. Hubbard also worked diligently to accelerate the SCCA acceptance of the device. He provided invaluable help and guidance in putting on the SCCA Safety Seminar at the 2004 National Convention. Prior to that the device was known but largely rejected by the SCCA community of drivers, but many drivers came out of the Seminar and immediately ordered their HANS, making this Seminar truly the “SCCA tipping point” in the acceptance and use of the device.

Without Bob Hubbard’s leading role in the development and presentation of that safety Seminar, and the championing both on and off the track of the merits of the HANS device by a determined Jim Downing, it would have been many more years before head and neck restraints would have been part of the SCCA racing scene.

The HANS device has taken it's place in history as one of the most beneficial safety items ever developed. As a result, Dr. Hubbard and Jim Downing have made an immeasurable impact on SCCA drivers and their safety.

Between them they have already received many awards, such as: 2003 FIA Special Safety Award; 2001 SAE Louis Schweitzer Award; 2000 SEMA Motorsports Engineering Award; and SCCA’s Snively Award for safety contributions. Today, with great pleasure and greater gratitude, please help me welcome them as inductees to the SCCA Hall of Fame.