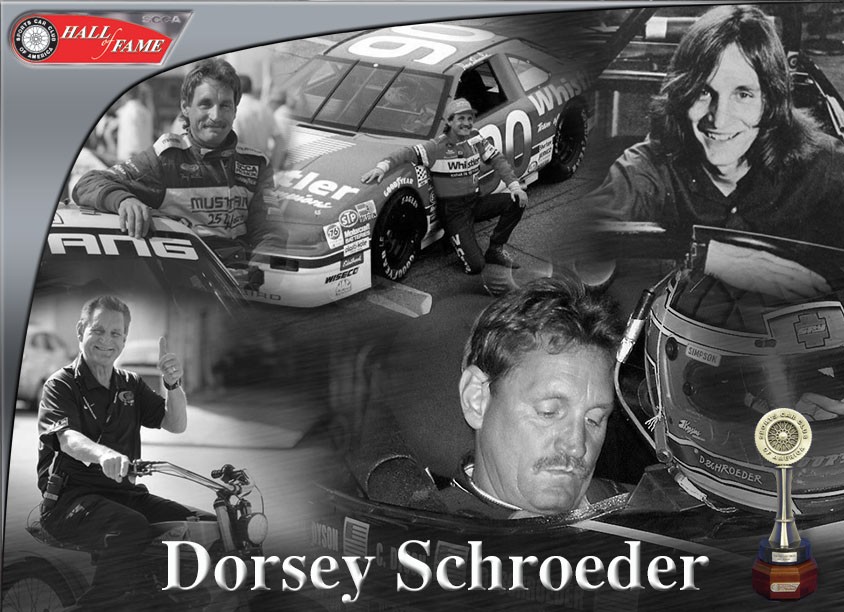 Anyone who has ever met Dorsey Schroeder has a story they can tell about Dorsey Schroeder. While Schroeder has long been known as one of the most colorful SCCA members, he has a racing record to back it up. Though recognized now for his work as a television broadcaster in the American sports car scene or through his work at the Runoffs, Schroeder’s driving record alone renders him a Hall of Famer.

Dorsey was one of the first SCCA members under the age of 21 to receive a racing license. Though an 18-year-old rookie racer seems downright ancient in today’s terms, the move by SCCA opened up an entry way for young racers to use Club Racing as a spring board to a professional career. Schroeder, a son of a St. Louis-area auto dealer and racer, raced formula cars early in his career. But his big break came with the launch of SCCA’s Sports Renault. Schroeder finished second at the Runoffs, the gold medal narrowly eluding him. But his Spec Racer days launched a career in sports cars that was as successful as any other driver. Schroeder won the Sports Renault pro series in 1985, and then hooked up with Jack Roush to win the Trans Am championship as a rookie driver in 1989. Through his career, Schroeder won 17 times in Trans-Am, and finished in the top five an incredible 52 times in 81 career starts. His Trans-Am successes provided opportunities in other areas of sports car racing. He was the 1990 IMSA GTO champion, and was given the opportunity to run IROC in 1990 and 1991 with Champions from all disciplines of American motorsports. He raced at the top level of NASCAR, especially on the road courses, where he finished a best of 13th and added a 19th place finish in the Daytona 500.

Beyond his driving career, Dorsey has been a proponent of SCCA racing at both the Club and the professional levels. As a broadcaster, Dorsey remains a part of the SCCA scene with regular appearances at the Runoffs. Through IMSA sports car broadcasts, Schroeder regularly reminded viewers of drivers who used the Runoffs and SCCA racing as a launching pad to the professional level. Today, if you don’t find Dorsey near his “short bus” at the track, you can find him in race control for the Trans-Am Series, where he serves as race director – bringing his career full circle.