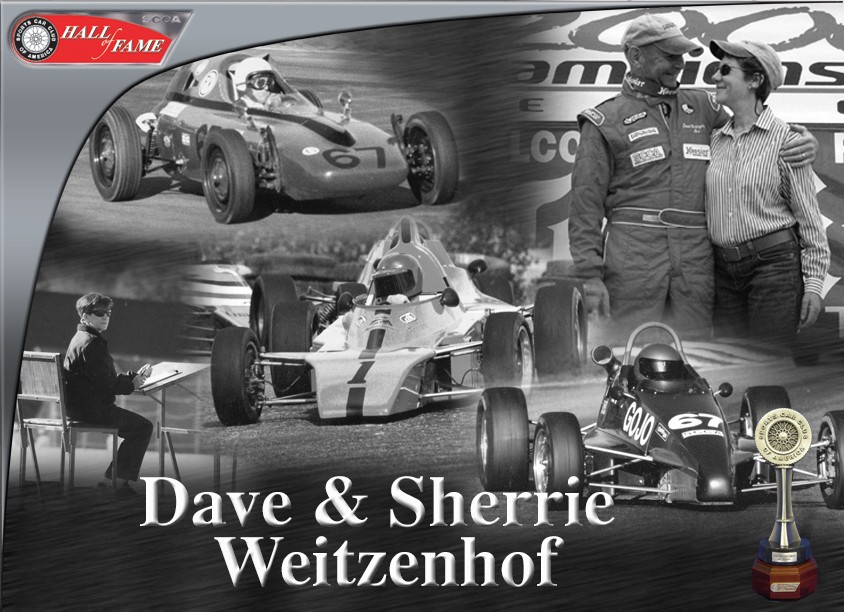 Few drivers epitomize open-wheel racing in the Sports Car Club of America more than Dave Weitzenhof. And no one has worked just as hard behind the scenes as his wife, Sherrie.

Winning a Formula Ford National Championship in the ‘70s and ‘80s was no mean feat. That era produced notable champions such as Dennis Firestone, David Loring, Bob Lobenberg, R.K. Smith and Jimmy Vasser. But Dave Weitzenhof won four Formula Ford championships over a decade from 1977 to 1987. That dynamic run came after winning a Formula Vee title in 1972 and before winning a pair of Formula Continental titles in the 1990s.

Overall, Dave Weitzenhof  has seven SCCA National Championships over what is, to date, a 51-year racing career. Weitzenhof scored the Road Racing Drivers’ Club Mark Donohue Award in 1972 and the SCCA President’s Cup in ’77. Only nine drivers have won both, with Weizenhoff as the first.

Through it all, his wife Sherrie has been at his side. They are a true team, and through five decades of racing, she has missed only a handful of races. Many that know them will tell you that Dave could not have achieved the success he has without Sherrie. Sherrie is recognized as a “Friend of the RRDC.”

Outside the car, Dave Weitzenhof is an accomplished engineer who spent much of his career with Bridgestone/Firestone and has numerous patents to his name. That engineering knowledge served him well in his racing, but he has given it freely to his fellow racers. He has shared car setup and vehicle dynamics information in documents that he has made available, and has given setup seminars at NEOhio Region, NEDiv and SCCA National conventions. He has always willing shared technical advice with any driver that seeks it.

Both his driving and engineering prowess were applied in his test-driving duties for the original SCCA Enterprises Sports Renault, which is now Spec Racer Ford. His work on developing the car was part of what led it to becoming one of the most popular classes in SCCA Road Racing throughout that last three decades.

Sherrie has supported the SCCA NeOhio Region for many years in many ways. She has organized many events, including the successful and long running Competition Clinic, and she chaired the NeOhio Hall of Fame committee.

The contributions that Dave and Sherrie Weitzenhoff have made to the SCCA and their home region have been appreciated on a national level and continue to positively impact competitors today.