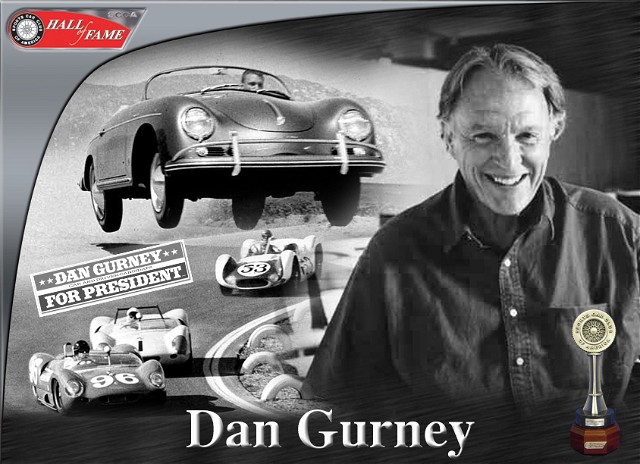 Some teach us how to compete, some how to build cars, and a very few show us what it means to win. One member did it all…a tall man from California named Gurney. The son of a Metropolitan Opera star in New York, a move as a teenager to Riverside, California, set him on a distinctly different path.

Like most drivers in the 1950s, Dan Gurney, one of the living legends in American sports car racing, started with SCCA club races, starting in a Triumph TR2 in 1955. He soon became a world-renown driver, constructor and team owner, competing at the highest levels of motorsport. On the international scene, in ways he was the definitive “overnight success.” As Sports Illustrated reported in 1959, “Dan Gurney, an obscure club driver 16 months ago, has joined the Ferrari sports car team.” Stunningly, but two years later in 1961, he tied British great Stirling Moss for third in the F1 Championship.

Gurney excelled in sports cars, grand prix cars, on road courses and ovals. He was the first to break the 150 mph barrier at Indianapolis. And on June 18, 1967, Gurney took a historic victory in the Belgian Grand Prix, becoming the only American to ever win an F1 race in a car of his own design.

He was the first to claim victories in all four major categories of motorsports; F1, International Sports Cars, Indy Cars, and NASCAR, and remains the only American-born driver to do so. He scored wins in SCCA Trans-Am, SCCA CanAm, and international championship races including the endurance classics at the Nurburgring, Daytona, Sebring and Le Mans. And at times cars from his AllAmerican Racers shop have dominated in both IMSA and Indy Cars.

Gurney was also an innovator, and at the 1968 German Grand Prix he became the first driver ever to use a full-face helmet in Grand Prix racing, and was the first to do so at Indy. In 1971 he developed the Gurney Flap (wickerbill), an aerodynamic innovation that has been adopted by automobile racing and aviation throughout the world. And he was instrumental in launching the rear-engine revolution in Indianapolis in 1963.

His innovations weren’t only in the field of things technological. A week before his historic win in the Belgian Grand Prix, he took a surprise victory with A.J. Foyt at 24 hours of Le Mans, where Gurney famously began the now-familiar winner's tradition of spraying champagne from the podium in a spontaneous and exuberant celebration of the unexpected win against the Ferraris and the other Ford GT40 teams.

In 1978, Gurney wrote an open memo to other Indy Car team owners that is now known as the "White Letter," which is considered the move that started the formation of the CART organization in 1979. And along the way, Gurney was one of the founders of the Long Beach Grand Prix, America’s longest-running street race.

To put it in true perspective, I think this says it all:

Among American Formula One drivers, his 86 Grand Prix starts ranks third, and his total of four GP wins is second only to Mario Andretti. Perhaps the greatest tribute to Gurney's driving ability, however, was paid by the father of Scottish World Champion Jim Clark, considered the best of his era if not all time, when the elder Clark took Gurney aside at his son's funeral in 1968 and confided that he was the only driver Clark had ever truly feared on the track.

The effect Dan Gurney had in popularizing our sport and our club is immeasurable. To this day, his name is one of the first mentioned when talk turns to our organization and the great names associated with it. He was and still is one of the most admired sportsmen of his generation. In 1964, Car and Driver nominated him in jest for President. Many felt it wasn’t such a bad idea.

And today, he becomes a member of the SCCA Hall of Fame. Dan couldn’t be here today, so accepting the award on his behalf, please welcome up his teammate and friend Bob Bondurant, his wife Pat, and Paul Pfanner.