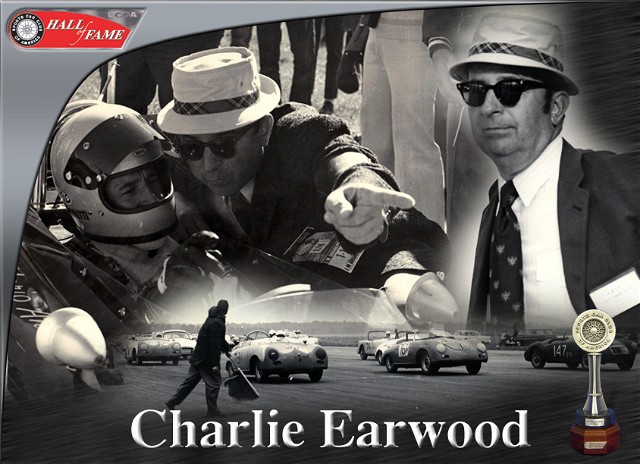 Charlie Earwood - Back in 1955, when Charlie took a spin through the back woods of Alabama in an Austin Healy, not even he could have imagined where sports cars would take him nor how far he would bring us for the early '60s to the present.

Charlie raced Porches in production categories in the '60s which was his time behind the wheel. After that, focusing on family, he began officiating at different events leading up to his presence at the SCCA Runoffs for 30 years from 1968 to 1998 mostly as Chief Steward at Road Atlanta.

And then many, many more with IMSA, HSR and other sanctioning bodies.

He spent a total, an incredible total, of 40 years in the tower.

After retiring from the insurance business in Atlanta in 1985, he was asked to come to Sebring to become the General Manager of the track there. His primary task was to reconfigure the track so they could run airplanes and racing simultaneously. Sebring still runs that configuration today.

Besides race officiating, just talking about his time and accomplishments there would seemingly take up all his time, but he loved fishing. And he loved fast cars.

Charlie is known for many sayings that officials and racers still use to this day. Some are written in the numerous articles he wrote plus articles in other periodicals.

Charlie mentored many officials and drivers over his long and illustrious career. The picture you see in front of you, top left, leaning over and talking to a driver, that's Mario Andretti sitting in the driver seat - the polite word is "mentored".

A saying which he used still rings true in racing and life is "it was a good plan; it just wasn't a great plan".

The Steward's Steward is what Charlie Earwood has been called over and over again and when somebody does the things that he's done and is recognized with the Wolf Barnato Award in 1981, the Dave Morrell Award in 1994.