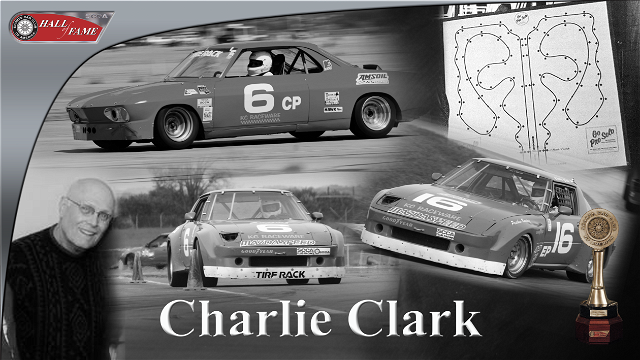 Charlie Clark has been a member of the SCCA since 1973.  In those 49 years, Charlie has been a road racer, autocrosser, organizer, mentor, and, most importantly, a leader.

Charlie’s road racing career started in 1976 and his portfolio includes many regional and divisional wins. He has made 33 SCCA National Championship Runoffs starts with five top- 10 finishes.

Charlie started as an autocross competitor when it was still called Solo One and Solo Two.  Charlie is a Solo One National Champion and a Solo Two, now just Solo, National Champion as well.  Most impressively, he is one of the few remaining 100 percenters – those who have attended every Solo National Championship event in the program’s history.

But Competition wasn’t enough for Charlie.  He knew that you had to give back to the organization for it to thrive.

In 1981, Charlie partnered with Bill Johnson and Bill Spencer and create a new Solo format, the ProSolo, a wildly successful addition to the SCCA catalog of programs.

Charlie served as the Solo Nationals Chairman multiple times while it resided in Salina Kansas, and in the Club Racing community as a Club Racing Board member. He was elected to SCCA’s Board of Directors for four terms. While on the BoD, Charlie served as one of the Liaisons to the Rally Board, touching yet another SCCA program.

Charlie is the 1985 winner of the Solo Cup for contributions to the Solo Program and the 2017 Dick Berger perseverance award winner. He is the Clark in Solo’s Johnson-Clark-Johnson ProSolo series trophy for the season-long champion.

More than all his competition experience and organizational experience with the SCCA, Charlie is well known as a mentor to both road racers, autocrossers, rallyists, and just members in general.  Whether it be competition or leadership advice and tasks, his no-nonsense style and willingness to jump in with both feet and get his hands dirty has made him a well known and well respected member of the SCCA.

Charlie will go down in SCCA history as a one of a kind, kindred spirit to many other members of this great organization.