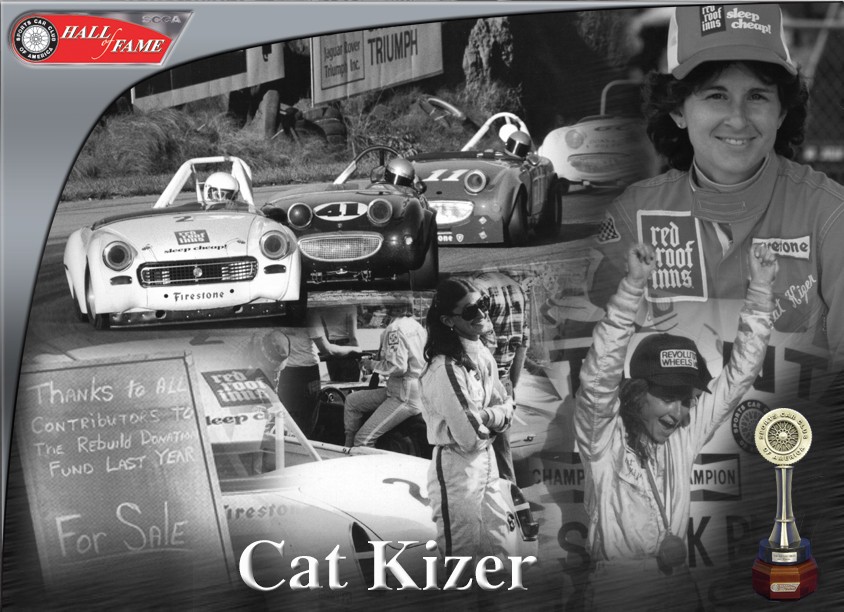 Catherine Kizer made her way to the SCCA Hall of Fame the hard way – she earned it.

Kizer and her husband, David, shared the Austin Healey Sprite they purchased while living in Dallas, Texas, with Cat climbing behind the wheel in 1974. Now living in Shreveport, Louisiana, the duo alternated races throughout the race season. In 1975, Cat won five times and finished second two times in just seven races, earning the Green Valley Racing Association’s Group Five Championship.

It was at the end of the 1977 season, following a pilgrimage to Road Atlanta to watch the Runoffs, that the decision was made to get serious about SCCA National racing and attempt to qualify for the Runoffs.  The SCCA Central Division was one of the most competitive in the country for H Production.  With no hope for both to qualify, the new plan was to alternate years of racing to earn the necessary points to qualify for the Runoffs. Under “Ladies First” rules, Cat was up first in 1978.

Cat accomplished the goal, qualifying for the 1978 Runoffs by finishing fourth in the tough Central Division.  At the Runoffs, she qualified a very respectable 6th on the grid, but beginning the second lap of the race, while attempting to overtake third, disaster struck.  She was punted off course, flipping end over end.  That was the end of her bid for the championship and the end of that venerable old Sprite.

Jim Trueman’s Red Roof Inns and Firestone offered sponsorship for the next season, and Dave agreed that Cat should get a second crack at the Runoffs. The two of them spent the winter building a new MG Midget Mk I for Cat to make another assault on the H Production National Championship.

During the 1979 season, Cat won four races. At the Mid-Ohio Bonus National sponsored by Red Roof Inns, she became the first woman to win a race in the track’s history and posted a lap record during the race. Cat won the 1979 Central Division Championship to qualify for the Runoffs.

Once there, Cat answered destiny’s call and became the first woman to win the SCCA Runoffs.  An inspiring drive from 8th on the grid to take command of the race on lap four and win by a mere 0.162 seconds over a field that included four previous national champs, earned Cat the prestigious SCCA President's Cup award.

To prove that it was no fluke, still with Red Roof Inns and Firestone sponsorship, Cat returned to the Classic the following year to defend her title.  She qualified on the pole and finished with a bronze medal despite being spun.