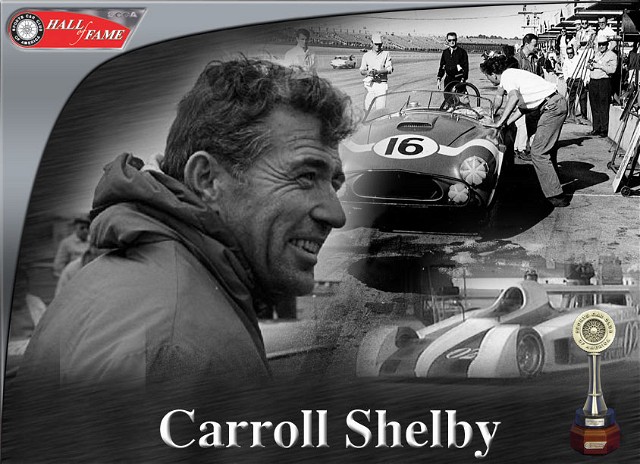 Carroll Shelby – Carroll was born in 1923 in East Texas; his health issues first became evident at 7 years old.  He graduated from high school in 1940 and was going to study aeronautical engineering at Georgia School of Technology.  He never got there.  The war came and he enlisted in the Army Air Corps and became a sergeant flight instructor and test pilot.  In 1952 his first automotive competition was in a 1931 Ford Model A flathead on a dragstrip.  He advanced in 52 to a Cadillac Allard and probably won 9 of 9 races.  In 1954 Donald Healey sent him to Bonneville with a Healey 1000S and they set numerous world records in speed.  He went to Le Mans in an Aston Martin.  In 1956 and 1957 he was on the cover of Sports Illustrated as “Driver of the Year”.  He was 1956 won his first SCCA Championship and 1957 he won 19 consecutive SCCA races.  In 58 and 59, he ran Formula 1 and he won Le Mans.  In 1960 he ran his last race.  That began the era of big horsepower with inspired engineering.  He had an aura about him that made him bigger than life.  He came to our convention in 1987 and spoke.  He told many racing stories further endearing him to our members.  Shelby’s story is a quintessential SCCA story:  It’s less about who you are and where you’re from than your desire to be a part of the sport.  How far can you go in motorsports?  Shelby showed us that you can go all the way to the top.