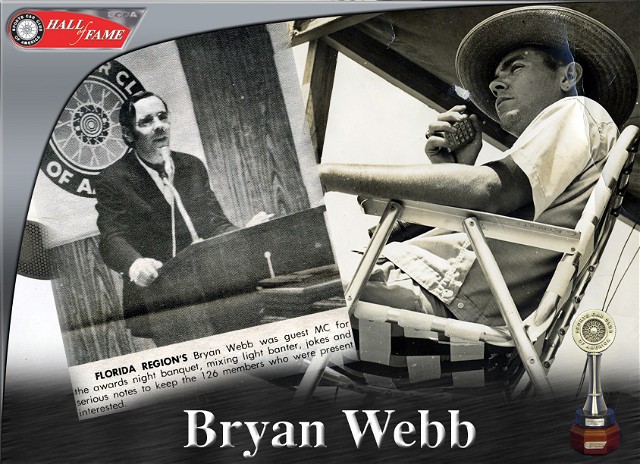 Bryan Webb was one of those individuals who appeared at the right time with the right skill set to be a leader with no hint of ego or arrogance. He was always quick with a quip to define the moment and relax everyone at the same time.

Bryan joined SCCA in 1961 and soon was Regional Executive of the Florida Region. He was a prime mover in the establishment of race tracks at Sebastian, Miami, and the track that's now Moroso.   He gained a little bit of notoriety at Palm Beach when he drove a maintenance truck into one of the canals.

Along with his duties as an officer and volunteer and a pit official, he managed to race an AC Bristol and a Beach FV.

He was as noted as a writer as he was for his administrative skills. Articles in today's Motor Sports, On Track, Car and Driver, Autoweek, he won three "best racing" articles for SportsCar.

He served on the SCCA Board of Directors through 1983. He served as National Administrator of the Stewards Program and was in large part responsible for the current Stewards Manual.

SCCA presented him with the Woolf Barnato Award in 1988 and the Dave Morrell Award in 1991.

In his active, working, involved life-time, the Southeast Division began presenting an annual award in his name.

He was a Marine Corps veteran from Korea and once he got to Blairsville, he started working on real estate and then operated the H&R Block franchise there. He wrote a column for the North Georgia newspaper called "The View from Brass Town Bald". Brass Town Bald is the highest point in Georgia.   He started the Union County Historical Society. He wrote the first book, The History of Union County Georgia. He worked on a project to preserve the courthouse. He ran the Bi-Centennial Celebration. And with the same passion he gave to SCCA, he started the Bald Mountain Kite Club.

An astounding guy and missed by us all.