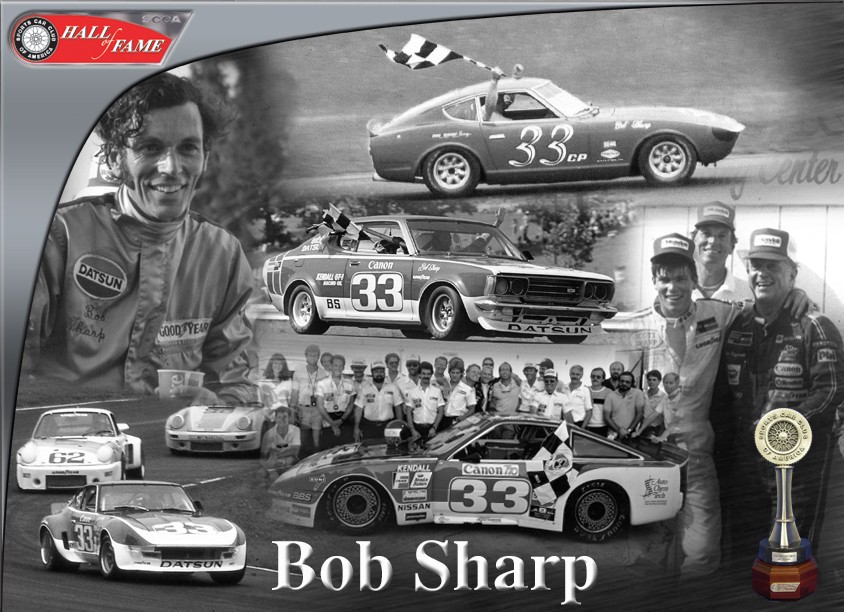 In 1960, after serving in the Army and while attending college, Bob Sharp began racing a 1960 Austin-Healey Bugeye Sprite despite it being his "daily driver" used to go back and forth to school. He competed across the northeast in SCCA competition, and switched to a Lotus Seven for a couple seasons before driving a Datsun, a partnership that would last 35 years.

Sharp was a salesman at P. Bruck & Son in Greenwich, Connecticut, selling Ramblers and Datsuns. He approached his boss, Paul Bruck, about racing a Datsun “Fairlady” 1500 Roadster to help promote the dealership. The car was a rarity in SCCA competition at that time, but Sharp’s success changed that as he was an expert at tuning the 85-hp, 1500cc engine and suspension to maximize performance. At only 24 years old, Sharp started his own car dealership and repair station in Wilton, Connecticut, with a three-bay garage/Gulf gas station and a used car dealership, and operated a race shop in one of the garage bays. To help fund his racing, he convinced the head of Nissan USA-East Coast in 1965 to sponsor his team, which became the first factory-backed racing sponsorship.

Between 1967 and 1975, Sharp won the Sports Car Club of America National Championship six times racing for Datsun. His success led to greater factory support for his team and paved the way for Nissan to support other Datsun campaigners around the country. Even after his driving career ended, Bob Sharp Racing would be the springboard from which several top drivers of the era would leap to the pinnacle of success, including Sam Posey, Brad Frisselle, Elliott Forbes-Robinson and Paul Newman.