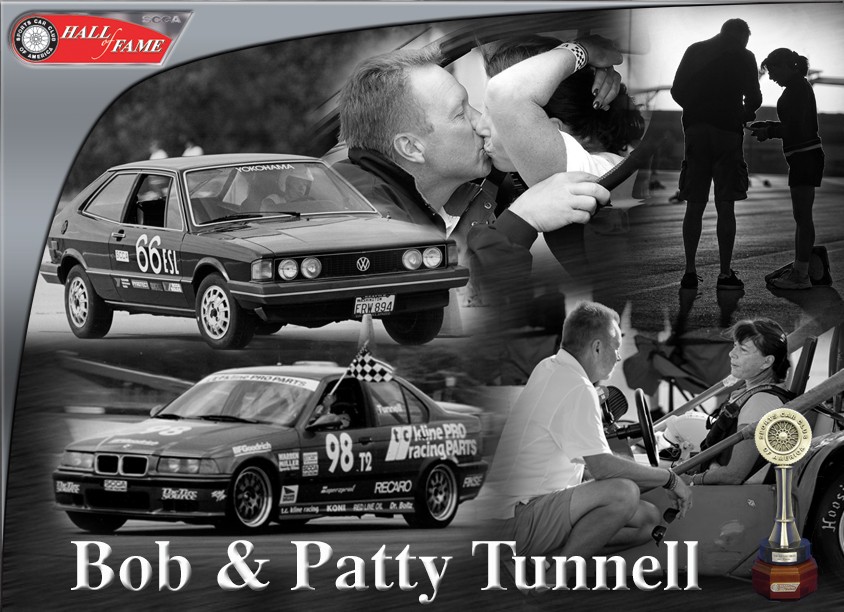 Bob and Patty Tunnell are individually among the top performers in SCCA history.

Together, they’re the cream of the crop.

On the tarmac, Patty Tunnell is a 14-time SCCA Solo Champion, the fourth most in SCCA history. She has won in 11 different classes, more than anyone else. Those 11 classes have come in five different categories, tied for the most all time - with Bob. No female driver has won more than her 26 career trophies. Her 18-year trophy streak is a woman’s record in SCCA autocross competition. Toss in another four ProSolo Championships, and her record continues to grow.

Bob Tunnell has seven SCCA Solo National Championships of his own. Those seven titles have come in five different categories, again tied with Patty for the most ever, and in seven different classes, which is fifth all time. Of course, he’d be one position higher in each category, if it weren’t for his lovely bride.

Combined, the dynamic duo have won 21 National Championships, second most of any husband and wife team to Ron and Karen Babb. They appropriately shared the Driver of Eminence Award in 2002 for consistently demonstrating excellence behind the wheel, and an exemplary degree of sportsmanship, dedication and unselfishness. Patty Tunnell claimed the Roger Johnson Spirit of the Sport Award in the same season for her attitude and willingness to help anyone and everyone. Bob was the 2007 Solo Cup winner for outstanding contribution to the Solo program.

And still, for the Tunnells, those trophies are only a small reason the pair are amongst the most recognizable figures in the SCCA.

Off the track, Bob has officially been involved in Solo event management on the local and national level. Bob has been a Chief Steward for Nationals for the last 20 years and served many years on the Solo Events Board. He is a key player in autocross site acquisition, coordinating access to Coors Field parking areas in Denver for events and leading by example to show others how to court the ownership, secure an arrangement, and retain the good site relationships that make the sport possible.

Bob’s foray into professional motorsports was as General Manager of Seattle International Raceway in the early 80s, and brought the first ever SCCA Trans Am race to Seattle in 1983.They have been tireless promotors of motorsports in general and the SCCA in particular, where Bob has credits as Executive Producer for five Nationally syndicated television shows about auto racing. Bob has performed stunt and high-performance driving sequences for feature films and television shows, and been an instructor for high performance driving, corporate programs, and vehicle evaluation for multiple automotive manufacturers over the years.

Dave Despain renamed an episode of his SPEED TV program “Wind Tunnell” in 2008 in honor of Bob and Patty’s appearance to discuss the Tire Rack Solo National Championships.

But both Bob and Patty are probably best known for their mentorship. New faces at SCCA events often soon encounter the Tunnells with smiling faces and helping hands, rolling out the welcome wagon and providing the guidance needed to keep the new and overwhelmed member coming back for more. This leadership by example has caused more than one new member to pay it forward, a gift that continues to give to the SCCA.

This attitude has continued, as both Bob and Patty remain active in some of SCCA’s newest entry level programs, including Track Night in America and Time Trials.

How tied together are this team? So much so that Bob actually taught Patty to drive, just a few short years ago when he was 16 and she was 15 years old.

They’ve done so much together that, although the honor would be worthy of each separately, it’s only appropriate that they became Hall of Famers together.