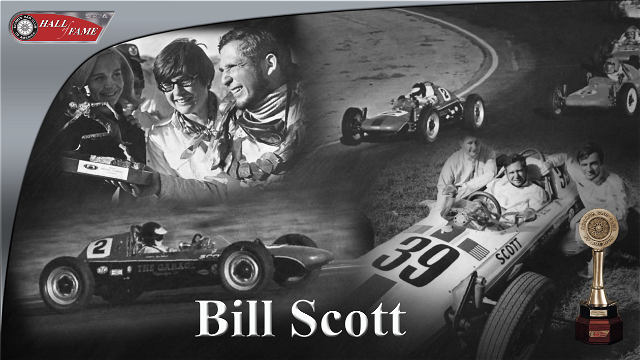 Bill Scott’s racing career began with an SCCA school in 1964, where his instructor was fellow SCCA Hall of Famer Mark Donohue. That early instruction clearly worked, as Bill went on to compete in more than 120 races nationally and internationally. He was the Formula Vee SCCA Runoffs champion and the European Championship Formula Vee winner in 1968, and the U.S. Professional Super Vee champion in 1971 and 1972.

In 1969, he formed Bill Scott Racing, in which his primary role was driver coaching. A number of his clients went on to win national championships. In the 1970s he started a competition driving school at Summit Point Raceway, later adding anti-kidnapping and counter terrorism training for chauffeurs.

Perhaps most importantly, he created an accident-avoidance school for young drivers. He showed a 30- to 40-percent reduction in accidents among teens who took his course. This model of coaching continues today, and his teen driving program was a model for programs like Tire Rack Street Survival.

Bill’s longest-lasting showcase was his care and service of Summit Point Raceway. The track had been a financial failure through its multiple ownerships, but in 1979, Bill and partner Tom Milner purchased the track.

Bill demonstrated that by utilizing the track seven days a week, it could become a financial success – a business model since used by other tracks. During his ownership, he expanded Summit Point from a one-circuit, 300-acre facility to its current four-circuit, 800-acre complex.

Shortly before his passing in 2009, he decided against pursuing an opportunity to sell Summit Point to the government, wanting to honor his promise that the track would always be available for club racing. As we know, it still is.

For his work as both a driver and a true steward of the sport, Bill Scott was inducted into the SCCA Hall of Fame in 2023.