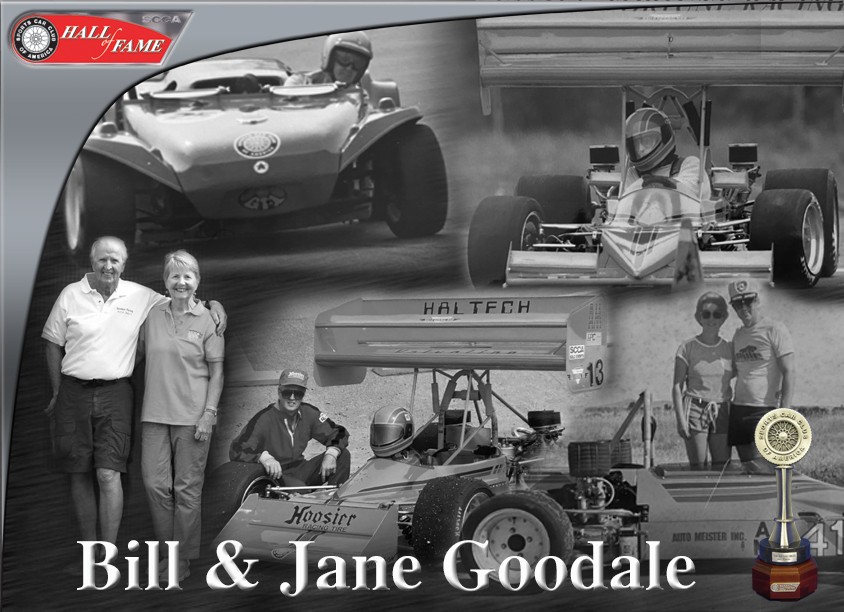 Bill and Jane Goodall have served the Sports Car Club of America as leaders, mentors, facilitators, officials, competitors and even parents of participants.

Their role in the formation of the National Solo program has made an indelible impact on the attitude, community and sense of comradery that have become a hallmark of the discipline.

Jane was solo chair in the 70s, when New England Region’s Solo program was just beginning to have a presence. Then her role led to support:  the region, people around them in the paddock, other drivers in the class they competed. For years before other Regions caught on, Jane hosted the region party at Solo Nationals. On one memorable occasion, runs continued in the rain and nearly after dark. Cold, wet and angry participants came into the party, but both Bill and Jane turned multiple moods around in that Solo City tent.

Bill was NER’s first, and for decades only, Novice chair. A lasting image of Bill’s work remains from impound at a National Tour in Boston, with Bill sitting on the back tire of his Tui and the FSAE kids mimicking his position, all looking like young Bills sitting on their tires. The advice dished out to those future engineers that day has likely helped them in their careers.

Bill was one of the first participants from inside the Solo program to be asked to serve as a Chief Steward for Solo Nationals. He did for decades, working with and mentoring many others who have taken on the role as the National events grew. He set the standards for consideration and thoroughness, with an understanding that all stewards are also drivers and needed to keep that perspective. Bill incorporated a policy of investigate, discuss, mediate and ultimately find the way to a fair decision. Although not all drivers were happy with the decisions, everyone knew they had been treated fairly.

Those Hall of Fame worthy accomplishments continue behind the wheel. Bill has earned 33 trophies at Solo Nationals, the most all time. His streak of 21 consecutive trophies is the sixth-longest streak in Club history. He won the Driver of Eminence in 1989 for consistently demonstrating excellence behind the wheel and an exemplary degree of sportsmanship, dedication and unselfishness. In 2010, he was awarded the Solo Cup for outstanding contribution to the Solo Events Program.

He has seven total National Championships, all in the A Modified and B Modified classes – the quickest cars available to autocross.

Jane herself was a trophy winning driver before stepping aside in 1989 as her children began their own SCCA driving careers.

Through it all, the Goodales were a team, even raising nationally competitive autocrossers and road racers.