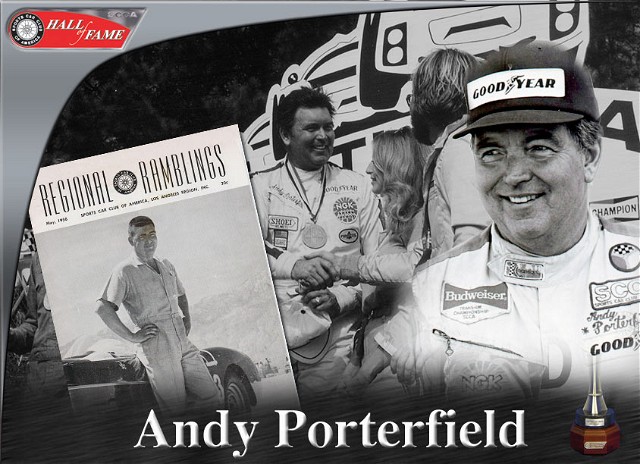 Andy Porterfield was born June 1, 1931.  He lettered in track in high school in Los Angeles and earned a degree in business from Chico State.  In addition to racing, he played racquetball and water skied and always kept himself in good shape.  Until the mid-80s, he was a partner in a company that built parts for nuclear power plants.  He said he saw the writing on the wall and managed to sell his share of the business before the bottom fell out of the nuclear power industry.  During his time racing Corvettes, Andy learned that stopping was as important as going.  For a long time, Corvettes were sadly lacking in the stopping department.  As a result he fitted some British Ferodo brake linings.  One day at Riverside, the Ferodo rep asked him to take on the distributorship in the United States.  He accepted and began the ongoing brake business that bore his name.  Today Porterfield Enterprises manufactures its own brake pads, rotors and distributes for other companies.  His pads and other brake parts are vital to the racing community.  In addition, they make high performance street pads and supply brakes for U.S. Military aircraft.   He had a distinguished racing career.  He won a national championship twice he and won 195 national races.  He was the Southern Pacific Division Champion 23 times and the Regional Champion 19 times.  Overall he won over 400 races.  He enjoyed it and had fun.  At the professional level, he ran Can-Am in the 60s with 4 podium finishes.  He ran 40 Trans-Am events and 20 IMSA races.  Trans-Am finished in the top ten 13 times.  He spent time in a sprint car and  a stock car.  He raced every year since 1956 including 2012 – 56 years behind the wheel.  In the 70s he got involved in club governance.  He served on the Cal Club Board for 16 years, as RE 5 years and in 1985 was first elected to the National Board of Directors.   The spec racer business, SCCA Enterprises, was going through a difficult time and an astute businessman was needed.    Andy was named Chairman of the Board of SCCA Enterprises and helped pull that business from defeat.  Andy coordinated the worker effort at the Long Beach Grand Prix every year.  In 2008 he received the McGill award and in 2009 the Woolf Barnato Award.  Andy Porterfield made significant contributions to motorsports.  He volunteered more time and effort than most.  He was conscientious and an astute businessman, faithful to the Club to the very end.  His passion for this club is unequaled.