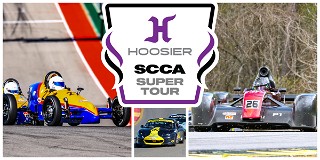 With the SCCA National Championship Runoffs complete, the 2022 Hoosier Racing Tire SCCA Super Tour Nationwide Points Champions have also been named. This year’s points battle consisted of the best six finishes in the 10 weekends of Hoosier Super Tour races, plus the Runoffs at VIRginia International Raceway on Sept. 24-Oct. 3, 2022, with the top 20 in each race earning points.

It’s not an easy title to win, often involving miles on the tow rig as well as a competitive setup at the track. That makes Graham Fuller’s third consecutive title in GT-Lite even more impressive, done with five race finishes plus a top-five at the Runoffs.

Michael Lewis was the lone two-class winner this season, taking the title in both GT-1 and GT-3. Zachary Whitston snagged the Formula Vee crown from his brother, Andrew, who held the 2020 and 2021 title. Whitston’s season was so impressive that he was unable to count his second-place finish at the June Sprints, as he already had four wins and a pair of runner-ups to his tally.

The two classes with the most competitors are no surprise, and for that reason Spec Miata and Spec Racer Ford Gen 3 (SRF3) are two of the toughest to win. Spec Miata racers Charles Mactutus trailed Travis Wiley going into the Runoffs, but a second-place finish elevated him to the title. In SRF3, Charles Turner held just a two-point lead on both James Goughary and Denny Stripling heading into the Runoffs; Turner walked away with a Runoffs silver medal and the Hoosier Super Tour class title.

Chip Romer was the champion of champions during the 2022 season, however. Romer, in Prototype 1, maxed out his points with six regular season wins and a Runoffs title – the only driver to run the perfect season this year.

Below is a list of 2022 Hoosier Super Tour Nationwide Points Championship winners with name, car make/model, and SCCA Region of record.

New Logo and Stickers for 2023