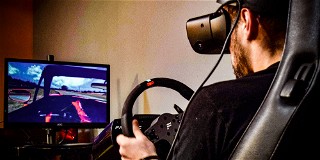 The 2022 iRacing virtual SCCA Runoffs is finally here! Just like the 2022 SCCA National Championship Runoffs that took place at VIRginia International Raceway from Sept. 24-Oct. 2, the iRacing virtual SCCA Runoffs will see hundreds of racers qualify and race in a similar multi-day format as the “IRL” Runoffs (a first for iRacing competition), with qualifying week wrapping later today. Then, on Saturday, Oct. 22, the main races in eight classes will take place on a virtual VIR stage, with those battles streamed live with a professional broadcast team calling the action as it happens.

Want to witness these epic virtual battles for yourself in real time? Spectating is a click away – and free! Have a sim setup and want to make a last-ditch run to qualify for one of the main races? Keep reading....

What You Need to Know

The long and short of it is that the races will be streamed live on SCCA’s YouTube channel and iRacing’s YouTube channel. But wait, there’s more, as Gregg Ginsberg and Larry MacLeod will be calling the action live during Saturday’s virtual races – they were part of the professional broadcast team that brought you the 2022 SCCA Runoffs at VIR barely a month ago.

Forty racers will qualify per race, which will undoubtedly include many racers in the SCCA community, some of whom raced during the 2022 SCCA Runoffs itself.

While iRacing’s vehicles don’t always perfectly align with SCCA’s GCR classes, there are uncanny parallels. Here’s a list of the classes, as well as Saturday’s broadcasting schedule:

As the saying goes: To finish first, first you must finish. A step beyond that is to stand any chance in racing, you must show up.

If you competed in any of this week’s qualifying sessions but perhaps didn’t make the cut of the top 40 racers per class, you’re encouraged to attend Saturday’s races on your simulator in the chance others fail to show in time for the green flag. The iRacing virtual SCCA Runoffs is an iRacing Super Session, so if you’re an active iRacing member, you know how this works.

If you have a sim rig, an iRacing membership, and hold a D class road license or above in iRacing, qualifying is still on for Saturday’s broadcast – so jump in! Friday’s qualifying is taking place right now, with the final qualifying session beginning at 7:30 p.m. EDT – cut free from work right now and start racing!

A complete schedule and other requirements for the iRacing virtual SCCA Runoffs can be found on iRacing’s Special Events Calendar page.

Whether you’re spectating or racing, don’t miss this weekend’s iRacing virtual SCCA Runoffs. One way to guarantee you’ll catch the action live is to head to SCCA’s YouTube channel right now, subscribe, and click that bell icon to be notified when SCCA begins streaming.