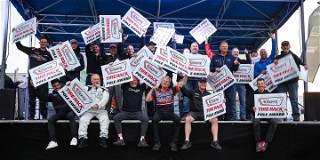 Three days of qualifying have come to a close at VIRginia International Raceway (VIR) for the 2022 SCCA National Championship Runoffs being held Sept. 24-Oct. 2, 2022, in Alton, VA. As such, 26 Tire Rack Pole Award winners have been identified and will lead their respective classes to the green flag over the next three Hagerty Race Days.

Each Tire Rack Pole Award winner receives some nifty swag and $500 to spend at Tire Rack. Equally important is the competitive and psychological advantage they gain by starting out front, and perhaps reaching the checkered flag first on their way to victory podium celebrations and a bottle from Mazza Vineyards, the Runoffs’ “Official Sparkling Wine” supplier for seven years now.

Of special note are the three drivers who each managed to secure two Tire Rack Pole Awards this year. One of those drivers is Danny Steyn, another is Kurt Rezzetano, and the third is Andrew Aquilante.

Driving the No. 9 Ocean Machinery/Nelson/OPM/G-Loc Mazda MX-5 in Super Touring Lite, Steyn claimed his fifth-ever Tire Rack Pole Award with a lap of 2:05.474 around VIR’s 18-turn, 3.27-mile circuit. He then earned his sixth Tire Rack Pole Award about two hours later on Thursday driving the No. 39 Dannys Angels/OPM/Rossini/G-Loc Mazda Miata to the top of the 60-car Spec Miata field.

Aquilante earned his 19th Tire Rack Pole Award Thursday by being the fastest Touring 1 driver, piloting his No. 33 Phoenix Performance/Hoosier/Hawk/Mobil 1 Ford Mustang to the top of the grid sheet. Just like Steyn, Aquilante went out about two hours later and secured his 20th Tire Rack Pole Award by locking down the first spot in GT-2 driving the No. 33 Phoenix Performance/Hoosier/Hawk/Mobil 1 Chevrolet Corvette.

In GT-1, David Pintaric looked fast on the opening day of qualifying in the No. 57 Kryderacing/Ave Motorsports/Goodyear Ford Mustang. However, a malfunctioning transponder meant none of the lap times were officially recorded. But on Wednesday, Pintaric had that gremlin sorted and popped to the top of the qualifying charts, a position he then secured Thursday for his third Tire Rack Pole Award.

The fight for pole in GT-3 was exciting over the three qualifying days. Troy Ermish, in the No. 38 Rebello Racing/Goodyear Nissan 350Z, was fastest on Tuesday. Then it was Jeff Dernehl’s turn to shine Wednesday in the No. 63 Roswell Outback Auto/RRE/Hoosier Mazda RX-7. During Thursday’s qualifying session – the last time the drivers would hit the track before the championship race – Ermish looked determined to win back the pole, but his Nissan exited the session on a flatbed truck before the 20-minute session came to a close, and Dernehl earned his first Tire Rack Pole Award.

In GT-Lite, Peter Shadowen and his No. 72 Honda CRX set the fastest time in the class on Tuesday, a time that couldn’t be beat throughout the rest of qualifying. That resulted in Shadowen earning his fifth Tire Rack Pole Award.

Chris Schaafsma, driving the No. 20 HoosierTireMidwest/NGP Racing/G-Loc Volkswagen Golf, opened H Production qualifying at the top of the chart. On the second day, however, the No. 18 Hoosier/Carbotech Triumph Spitfire of Steve Sargis turned a lap of 2:13.952, which reset the class qualifying record and ultimately earned a 14th Tire Rack Pole Award for him.

Marshall Mast, in the No. 31 Phoenix Performance/Hawk/Mobil 1 Scion FR-S, was the early pole leader in Touring 4 when qualifying began. Wednesday, however, saw multi-time Runoffs champion John Heinricy move to the top with a time that couldn’t be beat on Thursday. With that, Heinricy claimed his 12th Tire Rack Pole Award.

Touring 3 driver Jason Ott didn’t record an official lap time on Wednesday in the No. 09 Alpine/Hoosier/BimmerWorld/BimmerHaus BMW Z4 M, but that didn’t make a difference as he turned a record-setting qualifying lap on Tuesday of 2:04.223 in the class, which netted his first Tire Rack Pole Award.

Rounding out “Touring” coverage is the Super Touring Under class, which Johan Schwartz will lead to the start in his No. 4 VanSteenburg Performance Porsche 944. That is the first Tire Rack Pole Award for Schwartz.

The Formula Continental (FC) field kept things interesting over three days of qualifying. Tuesday saw reigning FC National Champion Simon Sikes, in the No. 13 RiceRace/Hoosier/Quicksilver/Primus Citation US2000, at the head of the pack. On Wednesday, though, Nolan Allaer and his No. 11 Martini/Chandon/LTD Motorsports Van Diemen RF02 posted a time of 1:49.895 to unseat Sikes. That time remained as the best in class on Thursday, and Allaer came away with his first Tire Rack Pole Award in only his second Runoffs appearance.

The theme of qualifying dominance continued in Formula Vee, where Brian Farnham’s Tuesday time of 2:15.116 held up Wednesday and Thursday, thus resulting in his very first Tire Rack Pole Award behind the wheel of the No. 15 Quixote Racing/Kearney DD/Autowerks Silver Bullet FR-S.

Charles Russell Turner, in the No. 32 SCCA Enterprises Mazda FE2, remained atop the Formula Enterprises 2 field all three days after setting a qualifying lap record of 1:50.853 on Tuesday for his Tire Rack Pole Award. Trevor A Russell, in the No. 31 Red Arrow Racing/Inde Motorsports Van Diemen RF Ford, took the Tire Rack Pole Award in the Formula X class.

A new name has risen to the top in B-Spec. Steve Introne ran strong at the 2021 Runoffs with a second-place start and a podium finish. He’s back to improve on that this year, and he’s starting strong, claiming his first Tire Rack Pole in his No. 12 VeloceEng/BlackHogBeer/BosMblTire MINI Cooper.

No surprise, the Prototype 1 and 2 class were quick all week. Todd Slusher dominated the Prototype 1 race when the Runoffs was last at VIR, claiming that year’s pole by nearly one second. He’s just about matched that feat this year, taking the Tire Rack Pole in his No. 62 Hempsun Farms Elan DP02 Mazda while setting a new qualifying record of 1:41.601 for the class.

In Prototype 2, Tim Day Jr. has now earned his third Tire Rack Pole at the Runoffs. And although his pole was claimed by only fractions of a second, his Tuesday lap of 1:47.566 reset the class qualifying lap record.

The 44-car Spec Racer Ford Gen 3 (SRF3) field is the second largest at this year’s Runoffs. Coming into the 2022 National Championship Runoffs, Franklin Futrelle had one Runoffs pole position to his name, which he earned in 2021. This year, that number grows to two as he placed his No. 97 Comprent Motorsport/Meco Inc car on the SRF3 Tire Rack Pole by a margin of 0.156sec over perennial frontrunners Charles Russell Turner, John Black, Denny Stripling, and more, with less than one second separating the top 12 qualifiers.

Below are provisional polesitters across the 26 different classes with driver name, hometown, SCCA Region, car, and fastest lap time. Entries with an asterisk (*) indicate a new Runoffs qualifying track record at VIR.

How to Watch Runoffs Racing

Friday, Saturday, and Sunday are Hagerty Race Days at the Runoffs, which will decide Summit Racing Equipment SCCA Road Racing National Champions for the year. Each of the 26 car classes will have one, winner-take-all event lasting either 15 laps or 40 minutes, whichever comes first.

Each day of racing is slated to commence at 8:15 a.m. EDT. Spectator tickets are still available, and prices start at only $35 when purchased online at VIR’s website. Those who are SCCA members can get a 20-percent discount on tickets by logging in to their membership account portal at SCCA.com. And Hagerty Drivers Club members can get 20 percent off admission by procuring tickets here.

Those who can’t be at VIR can still enjoy Hagerty Race Days with multi-camera video coverage broadcast live, online at SCCA.com. That presentation can also be accessed through SCCA’s official social media channels at YouTube or Facebook, and features the voices of Greg Creamer, John Fippin, Larry MacLeod, and Tom O’Gorman, with Heyward Wagner covering pit lane.

Additional In-Depth Coverage from “Inside the SCCA”

Don’t forget that the independently-produced “Inside the SCCA” podcast is going live – with video – from the SCCA National Championship Runoffs at VIR with a total of nine shows produced over Friday, Saturday, and Sunday during the Runoffs.

Inside the SCCA Presented by Goodyear Racing Tires and Vintage Racers for Rescues will kick off each Hagerty Race Day with “Breakfast at the Runoffs” at 7 a.m. EDT. The coverage picks up again during the lunch break with the “Halftime Show,” and wraps each day right after the final checkered flag with “Runoffs After Dark.”

The shows, hosted by Gregg Ginsberg and Brian Bielanski, will have driver and race worker interviews, recaps of race action, and a preview of the upcoming races.

You can watch the shows on SCCA’s YouTube channel, on SCCA.com, The Racing Network on YouTube, and Racer.com.