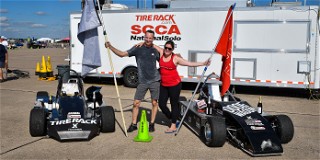 The nature of the Tire Rack ProSolo point system means that fireworks were expected entering the ProSolo Finale weekend. The full field did not disappoint. But all eyes were on the Super Challenge and Ladies Challenge brackets and the ensuing Johnson-Clark Johnson Cup and Fletcher Cup battles for the season-long races during the two day battle at the Lincoln Airpark.

A grand total of 38 drivers were mathematically eligible for the JCJ Cup entering the weekend, with James Yom leading the way. When he qualified for the Super Challenge, that eliminated a handful – and put him in the driver’s seat for an intense afternoon.

Yom earned a first-round win and a total of 16 points, including qualifying, by topping Bartek Borowski in the opening round, and that would turn out to be the championship clincher.

Yom lost in the second run to Solo Spec Coupe’s Jimmy Vajdak, sending the championship leader home – but opening the door for Vajdak to chase the title. Vajdak dropped Rich DiMarco to land in the semi-finals, where he fell to David Whitener in the ultimate championship decider. Vajdak claimed third place in Lincoln and earned 51 points, but landed just three points short of Yom’s total for the Cup.

Whitener lined up against Jason Hobbs in the final run of the event and the season, with Hobbs taking the gold medal at the ProSolo Finale – winning the battle, if not the war.

Kim Whitener shot into the Finale with the Fletcher Cup point lead, needing a solid if not spectacular Ladies Challenge showing to claim the crown. A top qualifying effort coming from the Ladies 3 index and advancing to the semi-finals with a pair of bracket wins locked down her season-long title.

But that semi-final loss opened the door for Andrea Wolfe’s first challenge win of the season. Wolfe marched through the bracket by topping a line-up of accomplished autocross drivers, knocking off Shelly Monfort, Kim Whitener and Jordan Towns to top the title.

As anyone who is even casually involved in Autocross social media knows, the F Modified community is among the loudest. Some say that’s because of pride in their often hand-built machines; others say it’s a team effort that grows their class; still others say they have to be the loudest because they literally can’t hear over the sound of their own cars. No matter what, this space can help spread the word – with Hobbs and Wolfe taking Challenge wins in Lincoln, it was an F-Mod sweep “for the glory.”

Full results and event info on the Tire Rack ProSolo Finale can be found here.