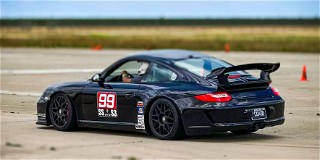 The SCCA Solo National Tour program held its fourth event of the 2022 Tire Rack SCCA National Tour points series last weekend at the popular Crows Landing site in California. More than 180 drivers recorded runs during the April 22-24 competition, held under beautiful blue skies with temperatures into the 80s both days.

Crows Landing is known for its huge layout and incredibly grippy concrete surface, typically providing open, fast, and flowing circuits. This event was no different, and came equipped with the traditional barbecue at the welcome party hosted by San Francisco Region.

A Glimpse At The Competition

Brian Heitkotter and Teddie Alexandrova stepped into Don Lew’s Porsche Cayman GT4 and walked away with Super Street and Super Street Ladies class wins. The experience was so good, it had them both publicly wondering how many jobs it would take to purchase a Cayman of their own. Luckily for the rest of the SS class, the answer appears to be “too many – for now.”

Glen Hernandez made a big second-day move to take the lead and Street Touring Xtreme win away from Alex Peraskevas by 0.402sec in his Subaru BRZ. The pair had nearly identical times on the first day, with Hernandez quicker in each of his final two runs to grab that top spot.

Keeping it calm, cool, and collected, Garrett Cogburn won D Street by the book – laying down his quickest times each day on his third and final runs. His final run moved him ahead of Mark Scroggs for the class victory.

Though the class was small, Jeff Smith deserves a special recognition for his performance in Xtreme Street B. Driving in his first National Solo event, Smith took the class win in his Mazda Miata.

With four of the first 10 Tire Rack SCCA Solo National Tours in the books, the season-long points chase is taking shape as an individual’s three best-scoring performances count towards the season total.

Learn more about the scoring system here. You can track the points race throughout the Solo National Tour season here. (Note: Points are usually updated a few days after each event.)