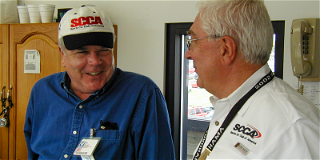 While Dan Sherrod’s passion for the SCCA was undoubtedly born from his father’s love of motorsports, Dan’s lifelong dedication to the Club made an immeasurable impact on the SCCA and all those he encountered. When Dan, an SCCA member since 1966, passed away on Saturday, March 19, 2022, it was fitting that the multi-term SCCA Board of Directors member be remembered by those who knew him well within the Club.

“On my first wedding anniversary, Wilma and I bought a Corvette,” Costa Dunias recalled of the time he first met Dan in the 1960s. “We headed to the bank, and the teller told us about a club in town where people did things with their cars in a parking lot. I made a comment about how I didn’t want to hurt my car, and I drove off.

“One Sunday early the next year, we were driving around town and we saw them [autocrossing], so we stopped to watch,” Costa continued. “This kid, who was probably only one year younger than me, came up and said, ‘Are you going to run?’ I said no. ‘Well, why don’t you run?’ he said.

“Turns out, he was entered, he had a Mustang GT350, and he essentially double dog dared me to enter, because I’m a chicken. So, I entered – and I beat him. And that’s how Dan and I met.”

It turned out that Dan and Costa lived less than a block away from each other, and their lives became intertwined for decades, with Dan’s parents essentially taking in Costa and Wilma when the couple moved to Odessa, Texas.

“His dad was a super guy,” Costa said. “His dad loved puns, and Dan loved puns. Dan would always come up with something that was precise but unusual in the way he talked.”

“Dan was an insurance broker before retiring,” said JoAnne Jensen, who served with Dan on the SCCA Board of Directors for several years. “He had also been a high school teacher. Dan was a student of the language and he enjoyed wordplay – choosing unusual but accurate vocabulary.”

While Dan first raced a Lotus 51 Formula Ford with the SCCA in 1966, his initial exposure to the Club came in 1956 when his father took Dan to a race in Fort Sumner, NM.

“His dad used to race an XK120M Jaguar in the ’50s, so Dan was probably in his teens when his father was racing,” Costa explained.

“I met his father when he was medical advisor to the SCCA,” said JoAnne. “For sure, Dan's love for the SCCA came honestly through his dad.

“I first met Dan when Costa was forming the Regional Development Task Force in the late ’80s,” JoAnne said. “The RDTF brought people together from across the country to gather or to develop, if needed, resources intended to strengthen our Regions. One of Dan's themes was always to identify and train your replacement. He recognized that sometimes we volunteers find a role and stay put, which precludes others finding and enjoying that same role. He was very inclusive and welcoming. At the same time, Dan was a man whose conscientiousness set him apart from many, and he could be counted upon to be true to his word and commitments.”

Dan was elected to the SCCA Board of Directors in the 1990s, serving for nine years. Although Dan hung up his racing gloves, he never left the track, becoming Texas Region’s pace car driver in 1994 and, as he stated in an interview he did with the Martinez Gazette News leading up to his duties as a pace car driver at the 2018 SCCA National Championship Runoffs, “I’ve been doing it ever since.” In his SCCA Runoffs pace car duties, he led the field at Road America, Mid-Ohio, Daytona International Speedway, Indianapolis Motor Speedway and more.

“Dan was always involved with the Club in some capacity, but he never was one to draw attention to his service,” JoAnne said. “As a result, he did not accumulate awards and honors, but he was trustworthy and constant. He was a loyal friend, and he will be missed.”

“We always had fun,” Costa said. “He was always an active member. He wasn’t necessarily out front leading the parade, but he was always there to help out. He’s one of those guys who did a lot for the Club but never got much recognition other than people loved him. He was the kind of member we all wish everyone was.”

Dan, who was 78 at the time of his passing, is survived by his wife Patty and their four children. Services will be held April 1-2 in Dallas, Texas.