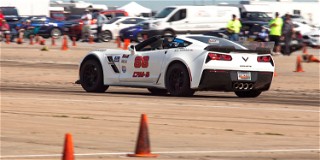 The 2021 Tire Rack SCCA CAM Challenge Invitational kicked off on Thursday morning as eighty competitors across three classes took to the grid to determine who had the fastest CAM car in the country. The venue for the Challenge was a modified version of the Tire Rack SCCA Solo Nationals Test N Tune course at Lincoln Airpark. The event ran start to finish yesterday with competitors from all three CAM classes were whittled down by their fastest run to one winner in each category. Those top drivers then compete for the fastest overall indexed time in a three-car shootout.

Each class has multiple rounds of competition. During the elimination rounds, half the field moves on based on the fastest overall of their three runs, and rounds continue until the top five remain in each class. In the final round, a single winner for the class is determined over a single run. The final three competitors left standing then go head-to-head over two indexed runs to determine the overall winner.

The competition kicked off yesterday with the 39 car CAM Contemporary (CAM C) class. Mark Daddio took the early lead in his Ford Mustang GT350 and held it through the first three rounds of competition, which narrowed 39 cars down to 20, then 10, and a final five. However, Daddio was unable to complete the clean sweep in CAM C after Chris Kirkland pulled out a flyer in the final round, which was also the fastest time set by any CAM C car. That run vaulted him into the final as the CAM C representative in another GT350.

The 15 car CAM Traditional (CAM T) battle was just as contentious, with multiple lead changes throughout. Chris Cargill led the way after the first round in his Chevrolet Camaro, but Fred Pascual usurped him as the leader in round two in a Ford Mustang. The final in this round only consisted of four drivers, including Jinx Jordan running in a borrowed car. Jordan is one of the CAM Challenge hundred percenters as a driver who has taken part in every event to date. The final round of CAM T competition turned into a cone-fest, with both Pascual and Wayne Atkins coning away a potential victory. In the end, it was Chris Cargill who came back to prevail over CAM T and punch his ticket to the final.

CAM Sports (CAM S) competition saw Brian Coulson jump out to an early lead in the first two rounds in his Chevrolet Camaro. However, Coulson got into cone trouble in the final, which left the door open for Matthew Braun who had been lurking in the background. Braun took advantage of the opportunity, and turned in the fastest time of the final in a Chevrolet Corvette Grand Sport. That set the stage for a two-run showdown between Braun, Cargill, and Kirkland.

All three drivers stepped up the pace for the final round, but it was Braun who found the most time — setting a sub-34-second run — giving him the indexed win by over half a second. Kirkland would bring home second in the final, while Cargill landed in third.

The SCCA would like to thank Speedway Motors for supplying breakfast and trophies for the 2021 Challenge and for supplying a great selection of parts for every car in the CAM grid. We’d also like to thank Jeff Kiesel and Kiesel Guitars for donating a guitar to the winner of this year’s Challenge. A huge thank you also goes to the Nebraska Region for making their trailer and equipment available to run this event. And last but certainly not least, thank you to Roger Johnson and Dave Feighner for designing and laying out the course for the event, and Lorien Feighner for bringing Saginaw Valley Region’s timing and scoring equipment to run the event.