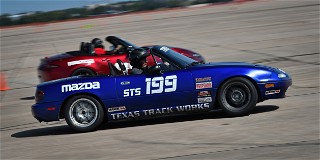 For the first time since 2019, ProSolo Champions have been crowned and a Tire Rack ProSolo Finale competition has wrapped up in Lincoln, NE.

Aside from some light rain ahead of Saturday morning runs that had dried by halfway through the first group, competitors were treated to bountiful sunshine and mild temperatures on the impressive over 100-acre concrete ramp at Lincoln Airport. The mirror-image courses designed by Sam Strano presented a variety of high-speed challenges, along with some hard braking zones.

This year’s event qualification was a bit different — due to COVID-19 and the cancellation of the 2020 Finale — being based on the past three years instead of one. Additionally, drivers were given the opportunity to run any class, and year-end points were determined in a winner-take-all fashion at the Finale over the weekend. As a result, there were quite a few shake-ups as drivers selected new cars or appeared for the first time on a national stage since before the COVID-19 pandemic outbreak.

The Ladies classes kicked off competition on Saturday with some of the closest competition of the whole weekend. Cindy Duncan led L2 competition through the entirety of Saturday competition, but Laura Marcus came out of the gate swinging on Sunday morning and found a combined 1.432 seconds to take the class lead — and the class win — by 0.637 second.

L3 saw an even closer was the margin as Julie Heaton took the win by 0.263 second over Kate Fischer. Kim Whitener was another 0.157 second back with Chris Peterson taking the final trophy in fourth.

When it came time for the Ladies Challenge Sunday afternoon, it was Whitener verses Fischer for top honors. As the pair completed the first runs of the final round, Kim led by about half a second. Navigating the left course after they switched sides, she stretched that advantage another two tenths to take the win by 0.7 second.

As the weekend got into full swing, the open class competition proved just as tight. A Street came down to just 0.177 second with Kevin Wentzel taking the win in his 2015 Porsche Cayman GTS over Charles Krampert in the 2006 Chevrolet Z06. Dan Simms claimed the third and final trophy in his 2009 Z06 another 0.775 second back.

E Street saw a big shake up Sunday morning as Eric Peterson fell from first to fourth despite improving on both sides. Meanwhile, Bartek Borowski jumped to a 0.165-second lead on his last two runs, followed by Dennis Hubbard and Charles Mathews. Riley Heaton claimed the fifth and final trophy position with the top nine drivers separated by less than a second.

Solo Spec Coupe was a story all weekend after Joey Green jumped to the lead on his first two runs — his best all weekend and enough to hold onto the win by 0.108 second over Mason Herrick. The top six finishers were covered by less than a second as Jimmy Vajdak took third, 0.244 behind Herrick. Matt Waldbaum and David Spratte rounded out the trophy spots in fourth and fifth respectively.

While those margins are impressive, Street Touring Sport took it a step further. David Whitener led the class through Saturday, but on final runs, Eric Stoltz found 0.072 second to take the class win by just 0.042 second. Whitener’s finish worked out in the end, though, as he progressed to the Super Challenge, to face C Street’s Mark Scroggs in the top eliminator round.

Once there, Scroggs led the pairing by 0.485-second as they switched sides, but hit a cone on his second run, handing the victory to Whitener.

The celebration was extremely emotional as David and Kim Whitener celebrated their respective challenge wins together. They’re not only taking home the event trophies, but also the JCJ and Fletcher Cups for Super and Ladies Challenge Points Championships respectively. Each of those awards came with a custom Kiesel Guitar, making the wins just that much sweeter.

The fun continues from Lincoln with the 2021 Tire Rack SCCA Solo Nationals starting Tuesday, September 7th. Follow along at scca.com, and on Facebook and Instagram with @sccaofficial.