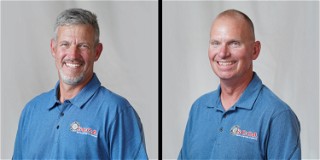 “This is a major piece of the puzzle as we look to create a successful structure for the future of Solo Program with focus on Region support and National Series excellence,” Wagner said. “Rick Myers has a ton of Club experience when it comes to figuring out how to get the difficult jobs done. And Brian Mason is among the most experienced in the country when it comes to professional autocross event design and deployment.”

Wagner, Myers and Mason will work together moving forward to define overarching strategies. From there, Myers will be in charge of executing strategies across the entire Solo Program with a focus on setting seasons up for success and working with regions to ensure they have needed resources from the National Office. Mason will then be the primary, hands-on producer of National Solo Series events.

It was 2002 when Myers joined SCCA as a member of Detroit Region. There he served as regional executive, treasurer, Solo chair, and was also the Great Lakes Division president at one point. In 2008, he joined the national staff as Region Development Manager, and was later named Senior Manager of Region Services. His primary role was to provide regions with leadership, guidance and support to effectively run their programs. He also acted as the “voice” for regions at the national office for program development.

Over the years, Myers has also served as Tire Rack Street Survival Manager, Starting Line Program Manager, Runoffs IT Support, National Convention Manager, and helped launch Track Night in America, Targa, and the Pine Mountain HillClimb. When free time does magically appear, Myers has been known to participate in Solo and ProSolo, RallyCross, RoadRally, and has also chipped in with Flagging & Communication.

“My second event as a member of SCCA was a ProSolo, and I was hooked from there,” said Myers, who has remained a Detroit Region member and is also a member of Kansas Region. “Our programs, at a region and national level, are facing short – and long-term challenges. But this job has always been a worthwhile, fun adventure and I’m excited to serve and work alongside our program enthusiasts as we continue to grow our sport.”

From serving as Solo Chair for SCCA’s Kentucky Region, Mason over the last decade has managed, produced or executed the Optima Batteries DriveAutoX Series, the Optima Search for the Ultimate Street Car autocross segments, the Holley Performance Products LS Fest Autocross and 3S Challenge, and was track steward for the Global Auto Salon event in Riyadh, Saudi Arabia, to name just a few monumental efforts. To his new position with SCCA he brings a wealth of experience that includes event operations management, course design expertise, staff management, series event planning, and a lot more.

Joining SCCA as a teenager in 1983, Mason got his start as a Scrutineer with Cincinnati Region because he was too young to drive. That tenacity resulted in him having the chance to work IMSA, Trans Am and SCCA events at Mid-Ohio Sports Car Course from a fairly young age. As soon as he got his driver’s license, it was off to Columbus, Ohio, for his first autocross. And just a couple years later in 1985, he participated in his first Solo Nationals and ProSolo event.

In 2005 after a move to Louisville, Mason got involved with Kentucky Region where he filled the role of Solo Chair, obtained a Solo Safety Steward License, got involved as the Membership Chair, and went on to introduce Street Survival events to the region. He also worked with NCM Motorsports Park to bring SCCA’s Starting Line school, Track Night in America, and Kentucky Region’s first national Solo Match Tour event to the venue.

“SCCA has been part of my life for more than 35 years, and autocross a significant force in who I am today,” Mason said. “Throughout my recent work producing and managing professional, high-profile autocross events, I’ve still always been part of the SCCA Solo community. In my new role, I’m sure there will be a learning curve. But I’m confident great and really exciting things loom just beyond the horizon for SCCA Solo drivers.”