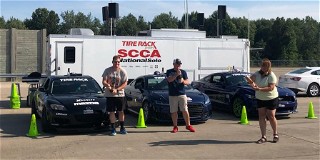 The magnetism of concrete in the state of Ohio once again attracted 228 drivers to the shores of Lake Erie for the Tire Rack SCCA Toledo ProSolo in Swanton. Weather had a minor impact on the event as Saturday morning competition began in wet, but drying, conditions. By shift C, both courses were completely dry and building grip. The skies threatened some rain in the afternoon, but cleared and kept the competition surface clear. Overnight rain brought foggy conditions for Sunday morning, which quickly cleared after the first few classes ran.

The Street 5 index class unifies drivers in two-wheel drive cars prepped for D Street, H Street and Street Touring Hatch. Sam Karp’s lead from Saturday through the end of class competition may make this contest look boring, but the margins and efforts of those behind him tell a different story. Caleb Pardus made a late push and came up just 0.182 second short on Sunday morning. Only improving on the right Sunday, Peter Ling settled for third. Devin Taylor and John Li claimed the fourth and fifth trophies respectively. All five trophies were covered by just 0.522 second and all five qualified for the Super Challenge.

A Street had one of the closest contests of the weekend. With no index involved, these drivers raced heads up. Jacob Glover led the way out of the first session ahead of Dan Sims, Kevin Wenzel and Eric Simmons. Sims found the magic on Saturday afternoon and took over the lead from Glover, by just enough to claim the win by 0.037 second despite Glover’s own improvements Sunday morning. Simmons was the big mover in the last session, taking over third from Wenzel who claimed the fourth and final trophy spot. All four drivers were separated by just 0.213 second.

Race Tire Index 1 brought together four karts, three FMods and a CMod for a total of 12 drivers running on index. Larry MacLeod led out of Saturday morning’s runs, but Robbie Campbell found time on the left to take the lead, while Jackson MacLeod passed his father in the standings. Some red lights Sunday morning kept Robbie from improving, but the elder MacLeod’s own red lights kept him from catching the first-time ProSolo winner. Jackson fell to third, just 0.010 second behind his father. Brad Smith represented the FMod contingent in the fourth and final trophy position.

The Ladies Challenge faced some scoring challenges but was able to take place after a delay. Shelly Monfort received a bye in the first round before Chris Peterson and Meghan Lapeta were both eliminated due to red lights. Jennifer Bedell eliminated Emily Whitaker who tagged a cone in their pairing. Next up was Cindy Duncan and Andie Wolfe. With times within a tenth of her dial-in, Duncan advanced to face Bedell. A cone for Bedell and a new dial-in for Duncan advanced her to the final round of the challenge against Shelly Monfort who’d had a bye in the semifinal round due to Peterson and Lapeta’s red lights in the first round. Duncan carried a 0.7-second lead as they switched sides, but Monfort didn’t leave anything on the table, making up 0.6 of that difference, but also tagging a cone, awarding Duncan the Challenge victory. Bedell took third without a runoff due to Monfort’s bye.

The Super Challenge got rolling after the ladies and the final four contenders were Aaron Buckley from Street 4, timing wiz Darrin DiSimo from C Street, C Street winner Neil Britton and R1 victor Robbie Campbell. Buckley broke out by just over 0.3 second to advance to the top eliminator round. On the other side of the bracket, despite coming within 0.08 second of his dial-in, Campbell was knocked out by Britton who was only 0.05 second off his own. A cone in the final for Britton eased Buckley’s path to the Super Challenge win. DiSimo claimed the third-place runoff by breaking out against Campbell.

The 2021 Tire Rack SCCA ProSolo regular season comes to a close this weekend with the Tire Rack Oscoda ProSolo in Oscoda, MI. Registration remains open with plenty of spots available.