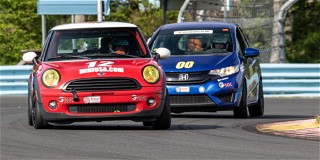 Out of the Frying Pan: The B-Spec community has made a big splash the past couple of years, inviting more and more racers to come play in their sandbox. They may have made a mistake when they invited Steve Introne.

Introne is a long-time Spec Racer Ford racer who took the invitation to come to B-Spec in a Mini Cooper. After a race-long battle with David Daughtery, Introne came out on top in his first Super Tour start in the class.

“B-Spec is an awesome class,” Introne said. “I ran Spec Racers for 20-plus years, and these guys are doing the same thing. It’s a momentum class. I had pressure the whole time, I could never give up to the very last lap. I had a great time.”

Miata Madness: Spec Miata is wild – that’s no secret. But every once in a while, as it did on Saturday at Watkins Glen, the class cranks it up an extra notch.

Anthony Geraci was a bit of a surprise winner on Saturday, coming from deep in the field and several lengths back to take the win in his Krugspeed Mazda Miata.

Most of the race looked like a run away for Danny Steyn and Nick Leverone, but with two to go Elivan Goulart put himself in the mix and shuffled Leverone out of the way. So how did Geraci and Leverone finish on the top of the podium?

“The draft helped me out a lot,” Geraci said. “Going through the bus stop, I was able to get ahold of the group and just hold the lane. Nick gave me a bit of a tough fight at the end, but it all worked out for us.”

That, of course, was understatement number one from Geraci. How did he even get into the mix?

“With two to go, Elivan got up to me and gave me a push and I was able to get in the draft and follow the guys,” Geraci said of his Krugspeed teammate. “I got behind Nick, we stuck together and got to the front pack and it just worked out for us on the back straight before the bus stop.”

Worked out for us? That’s true, but it was more exciting than that, according to Leverone.

“Danny and I were working together but they were coming hard at the end,” Leverone said. “With three laps to go they got to us and it was just a melee. On the last lap Elivan tried to get by Danny going up the straight and Anthony pushed me and we split them around the outside. We were four-wide going down the back straightaway into the bus stop. Anthony and I both cleared them but he got in front of me.”

That wasn’t the end. Geraci made a small mistake, and Leverone got back in front again. But Geraci went around Leverone for the final time on the final lap to take the checkered flag.

The Return of the Daytona Coupe: Carroll Shelby’s Daytona Coupe is one of the most famous SCCA race cars of the 60s, and popular for good reason. They were hugely successful up until the 1966 season when Ford tapped Shelby to develop their GT40 for Le Mans – a story that would make a wonderful movie in Hollywood.

So when one rolled onto the track this weekend at Watkins Glen, it turned heads. No, it isn’t an original – we racers may be crazy, but not completely insane – but instead Andrew Wickline’s Factory Five Daytona Coupe. The Type 65 Coupe is designed to be an accurate replica of the original 1965 World Championship Daytona Coupe, ready for a Mustang motor to be dropped in.

Right now, it runs in the catch-all GTX class, but Wickline is hoping for more.

“I bought the kit back in 2010, and I finally realized I was over my head and hired Mike Evans to build it for me,” Wickline said. “We’ve been trying to keep it from killing me ever since! We’re getting there, and trying to get it into the GT-3 class. I think it’s about right for it. People seem to like it and I’m happy to be here.”

More information on the Hoosier Racing Tire SCCA Super Tour from Watkins Glen International, including full results, can be found at the event webpage here.