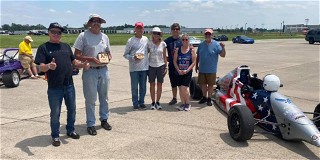 For the fourth Tire Rack SCCA Championship Tour in three consecutive weekends, 208 drivers took to the concrete at Grissom Aeroplex in Peru, IN this past weekend. Peru consistently draws strong competition on the strength of its grippy concrete surface and friendly hospitality.

The competitive cars of autocross often change annually and sharper knives are brought into each class, especially in the Street Category. Super Street R is no exception with C7 Corvettes being the widely accepted tool of choice. But with some regularity, drivers remind us that autocross is really about driving. That was the case this weekend as Steve Telehowski piloted his C5 Corvette Z06 to a second-place finish behind Dan Ireland in a C7. Michael Figliolia took the same C7 to a third-place finish to round out the trophies.

Similar cars, different tires. A Street had multiple lead changes Sunday after Jake Glover led at the end of Saturday’s competition. Heading into final runs, it was Glover on top, but Dan Sims had the last word, taking the win by 0.134 second over Glover. Charles Krampert had the raw time to take a commanding win, but coned all three runs on Sunday, forcing him to settle for third. Andrew Francis and William Damhoff claimed the fourth and fifth trophy positions respectively.

All weekend, Dave Montgomery was the class of the X Prepared field, taking the class win by 4.959 seconds. Behind him though, another story unfolded as Andrew Pfotenhauer’s Mazda Miata struggled to refire when hot. He and his codriver were able to complete their Saturday runs before a new set of spark plugs made things good as new for Sunday. Pfotenhauer was able to hold onto the third and final trophy position behind Raymond Dsouza, making the struggle worth it.

When you don’t have friends to play with, sometimes you invite some new friends. That’s what happened in A Modified this weekend as cars from C, B and E Modified came together to create one class. The husband-and-wife duo of Eric and Mari Clements took the two trophies, Mari’s first in open competition. But the real treat was the chocolatey treats Mari made and presented to their classmates on Sunday, with “AM-ish” scribed in icing on top.

Nearly 10% of the weekend’s competitors were women, including at least two first-time trophy winners: Tina Coil in HSL and Tracy Burkhard in GSL, one of this year’s Wendi Allen Scholarship recipients.

The teamwork award for the weekend goes to Cameron Asbury and Mike Fronckowiak. The differential in Timothy Thompson’s Street Touring Sport Mazda Miata broke during his first competition run on Saturday. While trying to figure out how to get the car he’d driven to the event back home to Chicago, Asbury found a replacement diff in Ft. Wayne, then Fronckowiak loaned Thompson a truck to go get it. The diff was installed in time for Thompson to work his heat 1 work assignment on Sunday, then take all three of his runs and drive home without any additional drama.