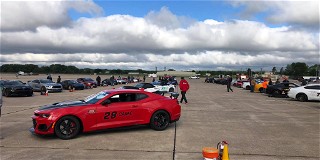 It had been 630 days from the conclusion of the 2019 Tire Rack SCCA Solo Nationals and the last time SCCA National Solo competitors took to the “Concrete Beach” when competition kicked off for the first of two Tire Rack Solo Championship Tours over the long Memorial Day weekend. Unseasonably cool temperatures created an extra challenge for drivers as they navigated the courses inspired by John Hunter’s 2016 Solo Nationals West Course, ran in reverse on the second day of competition.

Tied for the largest class of the event (with Solo Spec Coupe), Street Touring Sport drew 19 drivers with six trophy positions being awarded. With the cool temperatures, especially during the first heat, drivers across those the board found increased grip as their tires warmed up. Those with codrivers definitely saw an advantage in this area. On the strength of his third run, Adam Barber held a 0.322-second lead at the end of day one over David Whitener, with Mark McKnight, the only single-driver in a trophy position, in third. Day two didn’t bring warmer conditions and Barber and Whitener went back to battle. Both laid down their fastest times on their third runs, but it was Whitener on top, taking the win by 0.300 second. McKnight held onto the third step on the podium. Adam Salazar, Nathan Witt and Jackson Lee claimed the fourth through sixth place trophies respectively.

Also running in the first heat, Classic American Muscle – Contemporary struggled to put down their power in the low-grip conditions. Scott Steider stretched out a lead of 0.63 second over co-driver Matt Lucas on day one. On day two, it was Robert Gosda with the fastest time, leaping ahead of Lucas for the second-place trophy, coming up just 0.214 second short of Steider. Joe Tharpe claimed the fourth and final trophy.

Street Touring Ultra is home to a wide variety of cars and this weekend saw everything from a Fiat 214 Spider to a Mitsubishi Evo. In the chilly conditions, the all-wheel drive vehicles held a small advantage. Michael Carpenter established his position as the head of the field and took the win comfortably by 1.316 second in a Subaru WRX STi. Behind him, the battle raged as Brent Schneekloth took the second trophy position in a Mitsubishi Evo, ahead of Brandon Davis and Kevin Schultz, both in Subaru WRX STis.

E Street’s 16 drivers not only had one of the largest entries, but some of the closest margins. Riley Heaton led at the conclusion of day one by a mere 0.24 second over John Wolf with Eric Peterson just another 0.162 second back in third. The field behind the top three was just as tight and they all showed up on day two ready to win. Ivan Austin took the win, jumping from fourth to first on the strength of a 57.761-second third run. Wolf held onto second while Heaton stood on his first run, tagging two cones on his fastest run, sliding to third. Bartek Borowski had coned a day one run good enough for third, but made up for it on day two with the second fastest run, jumping into the fourth trophy spot. George Schmitt claimed the fifth and final trophy.