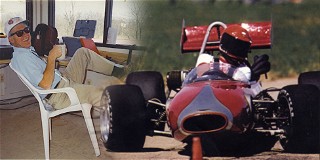 Reynolds was the second Chairman of the Solo Events Committee. He persuaded the Board of Governors to give the committee full Board status as the Solo Events Board, making it equal to the Club Racing Competition Board. It was also under his leadership that the Solo Events Board integrated the gymkhannas being staged by various independent clubs into what we now know as the SCCA Solo program. He proposed the idea of a National Championship event for Solo and helped create the inaugural event.

Known as a master car mechanic, Reynolds spent many years as a crew member, and in 1994 attended driver’s school and earned a competition license. He raced Formula Vees until an eye problem forced his retirement from the track in 2002.

At his request, there will be no calling hours or funeral service, rather a jolly party will be held at the convenience of family and friends sometime later this summer.

In lieu of flowers, donations can be made in his memory to the Tinmouth Creamery Restoration Fund, with checks made payable to the “Town of Tinmouth” and sent to 515 North End Road, Tinmouth, VT 05773.