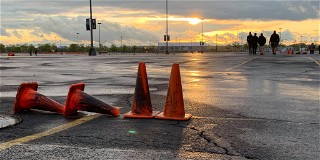 Mother Nature wreaked havoc on day one proceedings at New Meadowlands Sports Complex in East Rutherford during the Tire Rack SCCA New Jersey Champ Tour this past weekend. Overnight rain Friday left the course damp to start Saturday competition. But by second runs of Heat 1, the course was dry.

The specter of rain Saturday, however, never went away, and the skies finally opened up near the end of the second heat. The precipitation never relented the remainder of Saturday competition, growing stronger as Heat 3 progressed before beginning to subside during the fourth heat. Thankfully for day two, the predicted rain didn't materialize until well after competition was done.

Vehicle parity was on full display in H Street as five different makes/models were contending for the three trophy spots in the nine-driver class. Peter Ling, driving a Honda Accord, showed his Dixie Champ Tour win was not a fluke by taking the day one lead over the Ford Fiesta ST of Marko Gidej. But within a second of Ling were Michelle Knoll, in a Honda Civic Si; Ryan Lower, in a Mini Cooper; Will Teller, in a Honda Civic HB Sport; and another Mini Cooper driven by Joe Austin. The second day saw Ling continue to set the pace and maintain the lead until the very end when Gidej threw down a monster final run, dropping a full second and overhauling Ling for a 0.356-second victory. Teller rebounded from a self-admitted rough opening day to round out the trophies.

Super Street was heavy on Porsches of both the GT3 and GT4 variety, with two Corvettes and a lone Nissan GT-R left to take the fight to the Germans. Pat Salerno, in a Porsche GT4, laid down the fastest two scratch times of the class battle Saturday, but only his third run was clean, leaving him with a slim 0.319-second lead over the Porsche GT3 of Chris Dressler. On Sunday, Salerno and the "Porksche GTR" of Ka Kit Gary Tsui traded the lead multiple times. But Tsui's Godzillian efforts on his final run were negated by a cone, handing the win to Salerno. Second was Tsui only 0.572 second behind, and Dressler was third.

Street Modified provided its fair share of drama over the weekend as well. The day one deluge saw John Vitamvas leading in a Mazda RX-8 over Todd Kean in the "Panda" Nissan 240SX. PJ Corrales, co-driving with Kean, found himself sitting fourth behind Eric Anderson who bolted up from Chattanooga, Tennessee to co-drive with Vitamvas.

Day two saw the Panda doing “Panda” things. Between a blown injector O-ring and a failing alternator that drained the battery and killed the car, the team was kept scrambling throughout the day. However, perseverance paid off as Kean laid down a final run that no one else could match, taking a 1-second win over Vitamvas. Anderson claimed the final podium step.

Next on the schedule is the Tire Rack SCCA Chicago Champ Tour, May 21-23 at Route 66 Raceway. It’s not too late to register for that event and experience I new site to the Champ Tour calendar.