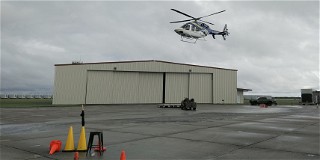 This past weekend’s Tire Rack South Texas Champ Tour at Naval Air Station Chase Field in Beeville, Texas, had a little bit of everything. Some severe wet weather, some seriously gorgeous sunshine, some serious competition, and a brief delay for a medical helicopter. But don’t worry, the latter wasn’t serious. Just a wayward visitor who sought shelter from a storm and needed a couple minutes on the grid to get back airborne.

This was the first time a National Solo event had taken place at Naval Air Station Chase Field, and early feedback seems to indicate it was a positive experience. The competition course was long and rewarded those who could carry big speed in multiple sections on Sunday. And the concrete had amazing grip after things dried out and cleaned up. By the end of the event, some even said it felt similar to the concrete at Lincoln AirPark in Nebraska.

The largest field for the weekend was CAM-C at 15 entries, and the class did not disappoint. It was Jacob Crow, in a Ford Mustang GT, who won by 0.784 second over another Ford Mustang driven by Eric Sutton. Jeff Warden came third in a Chevrolet Camaro. CAM-S came to play, too, as David Rock and his Chevrolet Corvette Z06 emerged victorious by just a half-second over the Dodge Viper GTS of Eric Peachey. Andre Illick, Peachey’s co-driver, finished third in CAM-S. And in CAM-T it was Chris Cargill, in a 1985 Chevrolet Camaro, who beat co-driver Wayne Atkins by 1.253 seconds.

F Prepared also put on a good show as Wes Hughson, in a Honda S2000, got the win by 0.746 second over co-driver Jesse Waymire, and Michael Willman finished third in another Honda. Amazingly, Hughson managed the victory with a clutch that wouldn't fully disengage during Sunday runs. What was engaged during the weekend was C Prepared with eight entrants. That class saw Todd Farris get the win by a scant 0.231 second in his Chevrolet Malibu over the Ford Mustang Cobra of Robert Lewis. Only a couple ticks back in third was Jeff Wong in a Chevrolet Camaro SS.

Extreme weather conditions moved on by Sunday, but the Xtreme Street A class kept the competition extreme all weekend. There it was the Mitsubishi Lancer Evo of Bailey Ipock that came out on top by half-a-second over Matthew Peck in a Nissan 240LSX. Peck’s co-driver, Peter Lindberg, finished third. And in Street Touring Xtreme it was the Scion FR-S of David Powers that triumphed by only 0.197 second over Brandon Slater in a Subaru BRZ. Third was the Mazda RX-8 of Armstrong Vongsavath.

Nearly as close a finish came to pass in Solo Spec Coupe (SSC). A spec competition class designed to keep things close, SSC did just that in Beeville. The winner was Justin Harbour, in a Scion FR-S, by only 0.313 second over co-driver Anthony Oliveri. Third was Aaron Hachenberg who was also in a Scion FR-S.

It’s now on to East Rutherford, New Jersey for the May 7-9 Tire Rack SCCA New Jersey Champ Tour this coming weekend at New Meadowlands Sports Complex. Indeed, registration for that event is open, so be sure to sign up now to save your spot before the entry cap is reached!