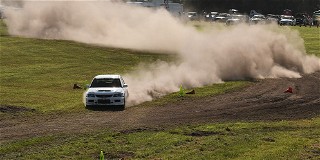 Competitors woke up Sunday morning to much milder weather in Topeka, Kansas for the final day of competition at the 2020 DirtFish SCCA RallyCross National Championships. A brief rain shower during the first heat helped keep dust down but it was not enough to create any mud. The long, flowing course used nearly all the space available in the approximately 24-acre field adjacent to Heartland Motorsports Park.

All competitors were given nine runs on two courses designed by Brianne Corn, Leon Drake and Ed Trudeau. The total times from Saturday’s five runs and Sunday’s four runs were combined to set each driver’s score and determine nine National Champions. In addition to the combined times, each cone hit resulted in two seconds added to the driver’s time while missing a gate resulted in a ten-second penalty.

The competition and stories are described below.

All weekend it was the Collin Oelkers show in Peter Bozeman’s Honda Civic Si, but his championship was briefly in jeopardy when a second debeaded tire let go just before the finish, keeping him from being red flagged and being charged with a DNF. After the second debead, Oelkers backed down the pace, saying “I didn’t want to blow that lead.” Waiting for any opportunity, Evan Markewycz closed the lead by over four seconds, but still settled into second place. Rob Krider jumped ahead of Hal Denham to take the third and final trophy position on his last run.

Sean Grogan dominated competition on day one but struggled with a failing clutch late in heat on Saturday, forcing him to jump cars for Sunday competition. John Voegli offered up his 2003 Mazda Miata for Grogan to finish the event. “I got a call from Ryan Miles telling me that I couldn’t go home and that John could help, so I decided to stay for day two” said Grogan. The new co-driver seemed to help Voegeli, who jumped from fourth to second over four runs Sunday morning. Logan Altmyer held onto the third trophy position and his co-driver, Adam Raymer put down some fast runs to take the last trophy in fourth.

Heading into day two, Jan Gerber led the Stock All field by over three seconds, but the dewy and wet conditions posed a challenge for drivers in SA. Josh Armantrout came out on a mission and by second runs, he’d taken the lead. By the end of the morning, he led by 2.107 seconds over Gerber. “It was a repeat of last year. It was closer after day one, but I pulled out a lead in the morning and was able to stay in front,” said Armantrout. Timothy Thompson held the third step on the podium while Chris Endres had an impressive drive to earn a trophy in his 1993 GMC Typhoon. Steve Ducharme, owner of Jan Gerber’s seat, claimed the fifth and final trophy.

The field in Prepared Front was the second largest of the event and the competition was close throughout the entire competition. Don Carl led when the day two began, but he struggled to maintain the pace of Robert Seelig and Edwin Cunill, who both also stayed clean through the entire event. Seelig set the two fastest times of the class for his final two looks at the course, securing the victory and his second RallyCross National Championship. “I thought I was the biggest underdog because I thought you needed to come out with at least 200 hp to compete.” Yet, the D16 that came in his 1989 Honda CRX Si was sufficient to take the class win. Cunill settled into second while Carl fell to third. Matt Wolfe held onto the fourth trophy position and Jim Rowland recovered from some cone trouble on day one to take the fifth and final trophy.

After seven years of trying and a several trophies in the rain, Shawn Roberts finally got a dry RallyCross Nationals, leading to his first National Championship. Roberts held a 1.395-second lead after day one with Gonzalo San Miguel hot on his heels. The pair were neck and neck to start day two, but San Miguel tagging cones made the difference and Roberts took the win by 5.377 seconds. When asked who he’d like to thank, Roberts jokingly thanked Hoosier Racing Tires and Mazda Motorsports, but then went on to thank his wife, Katie Orgler, who is always there to race with him. Howie Johnson drove his 1995 BMW 318Ti to a third-place finish while Orgler held on against a charging Mason Herrick to take the fourth and final trophy.

The Prepared All field was small by mighty. While Mark Hill was the favorite to win and led from start to finish, he attributes his success to his competitors. “Mark Macoubrie has challenged me, not this time, but the four or five times prior to this, to make myself better. The RallyCross group is a tight knit group that makes this a fun time.” Mike Coons claimed the second and final trophy position, holding off a strong effort from Clifton Kangas.

There was no denying ZB Lorenc his Championship in his 1998 Volkswagen GTI. After leading day one competition by nearly 13 seconds, he stretched out the advantage on day two to 17.254 seconds. Leading the rest of the pack was Greg Mercier in another Volkswagen GTI, but of the 1984 variety, holding off Niles Davis in a 1989 Honda CRX by 1.950 seconds. Scott Embury claimed the fourth and final trophy in the 1998 Dodge Neon. When asked about the weekend, Lorenc commended, “these are the kind of courses we like to run in Ohio so I was familiar with this layout. I think the courses were absolutely awesome.”

Day one competition ended in frustration, concern and the promise of more work for class leaders Peter Dozeman and Brianne Corn in their 1994 Mazda Miata named “The King.” What was suspected to be a clutch failure was finally diagnosed as a bad rear differential after two clutch and transmission changes. Both Dozeman and Corn were quick to thank their friends and teammates who helped with the wrenching all weekend, Carlos and Joe, along with Jesse Prather who met them at his shop Saturday night to sell them their choice of three differentials. Despite three hours of sleep, the pair came out of the gate hard. For Dozeman, that resulted in two cones, opening the door for Corn. “Up until the last two runs, I had kind of resigned myself to just finishing right behind [Peter],” said Corn. “I managed to pull it together, made a lot of mistakes on the first runs; it was really slick.” She definitely pulled it together, slowly chipping away at Dozeman’s lead to take the win on her final runs by 2.522 seconds. Doug Leibman was not fair behind, finishing just 3.215 seconds behind Dozeman. “Doug Leibman kept us honest,” said Dozeman, “I really like the guy. He’s a great competitor and gentleman and I do love his Super Beetle.” Todd Wicker claimed the fourth and final trophy position in the class.

Austin Dowda held a small lead after day one of competition, but kept the power down on day two. He took the class win by 5.500 seconds over Jason Fuller, who narrowly took the second trophy position ahead of Jess Moeding by just 0.390 second. When asked how he felt, Dowda said, “It feels awesome! I’ve never trophied at a National Championship race. I feel like I’ve always had the wrong car or the wrong tires, so I made sure I had all of the right stuff to compete.” Jumping in for a co-drive in Jonathan Olschewski’s Isuzu Impulse RS, Kent Hamilton took the fourth trophy ahead of Todd Briley and Daniel Ebling in fifth and sixth respectively.