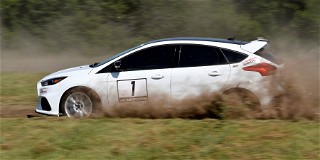 The 14th annual DirtFish SCCA RallyCross National Championship has begun at Heartland Motorsports Park in Topeka, Kansas. Drivers started their weekend with new check-in and tech procedures on Friday, allowing for drastically reduced physical proximity. Once all entrants were checked in, a socially distant drivers meeting spread the 112 drivers out across the grid area before the traditional class inspection allowed competitors to look at each other’s cars. A few minor issues were addressed before cars returned to grid on Saturday morning, ready for competition to begin.

The first heat brought competition from Stock Rear, Stock All and Modified Rear. Cones and missed gates were common in the first set of runs, but drivers cleaned up their runs through the heat. As the day warmed up, Stock Front, Modified Front and Modified All took to the course. While all drivers got five runs, this heat sealed the deal that competitors would only see one course on the first day of competition instead of the traditional two. Prepared Front, Prepared Rear and Prepared All finished up the day’s competition as the day began to cool off.

Below is a rundown of the stories in each of the nine competition classes.

Sean Grogan will be taking an 11.162-second lead into day two competition, but it isn’t without drama as his 1998 Porsche Boxster is heading back to Michigan with a torched clutch. He’ll be jumping into the Mazda Miata of John Voegeli. Lothrop WIthington IV is hoping Grogan takes some time to acclimate as he sits in second place. Adam Raymer and Voegeli are within striking distance in third and fourth.

We predicted a battle between Jan Gerber and Josh Armantrout and they’re not letting us down. Gerber leads Armantrout by 3.282 seconds, but Timothy Thompson is only 0.955 second back in third and Jorge Gonzalez is another 1.091 back in fourth. Chris Endres is narrowly holding onto the fifth and final trophy ahead of Noah Quick who is limping his Subaru Impreza WRX through the event on three cylinders.

Don Carl is showing the way, but his choice of equipment is surprising. While the rest of the grid is on knobby mud and grass tires, Carl is on all seasons. Edwin Cunill is holding onto second with Bob Seelig, Matt Wolfe and Warren Elliott all within striking distance as they hold down trophy positions.

The battle for the lead is hot and heavy in PR with Shawn Roberts leading the way, but Gonzalo San Miguel is just 1.395 behind and picking up speed. Howie Johnson and Eric Adam are holding down the remaining trophy positions respectively, but James Green is just 0.808 behind in fifth.

Mark Hill is dominating PA as anticipated, but Casey Wise and Mike Coons are going to keep him honest while battling for the second and final trophy position as they are separated by just 1.002.

It’s the ZB show with ZB Lorenc leading field by 12.942 seconds in his 1998 Volkswagen GTI. Leading the rest of the pack is Greg Mercier in his 1984 Volkswagen GTI with just 0.064 second over Joshua Mefford. Niles Davis holds the final trophy position.

We knew that Brianne Corn and Peter Dozeman were going to be the fastest in MR, but that speed came at a cost. After leading the class, Corn lost the clutch on her final run resulting in a DNF. As a result, Dozeman leads into day two with Corn in second. Doug Leibman and Ryan Redenbaugh are in  third and fourth trophies respectively.

The battle in MA is tight at the top with Austin Dowda leading the class by 1.393, but Jason Fuller and Jess Moeding are legitimately tied for second in a Subaru Impreza WRX and Mitsubishi Lancer respectively. Kent Hamilton, Todd Briley and Danial Ebling are in the remaining trophy positions in the largest class of the weekend.