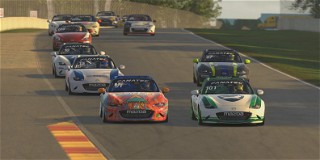 Thursday night marked the finale of the second Hoosier Racing Tire SCCA eSports Super Tour with a pair of fantastic races from the four-mile Road America. Two championships and prize packages were on the line thanks to SCCA’s friends at Competition One, Hawk Performance, KONI, Tire Rack and Hagerty.

The Formula 3 race began with three drivers alive for the championship – two in Andrew Pallotta and Max King that controlled their own destiny, and one in Caleb Patrie who needed a win and a lot of help to stay alive.

Patrie did all that he could, running away for the win. But when Pallotta spun with 10 minutes to go in the race in a battle for second with King, King was able to just turn laps, finish third, and win the Formula 3 championship.

“Going into this race, I knew I had to win the race in order to be a contender for the Championship,” Patrie said. “Right away, I knew I had to attack and get the lead early and hope that Max and Andrew needed to battle. It looks like that’s what they needed to do, and from there on out it was running consistent laps and trying to finish ahead.”

Pallotta was locked in a duel with King through the early stages of the race, each needing to finish in front of the other to overtake the other in the season-long point standings. Pallotta dropped a wheel into the dirt on the inside of Canada Corner, unsettling the car just enough on exit to spin into the wall.

With his competition out, King needed to just finish seventh or better to take the title.

“I saw the qualifying times that those guys put down and I thought, oh man, I’m doomed,” The champion-elect said after the race. “Caleb had a really fast pace and was pulling away, even with Andrew there. I was just going to stick to Andrew, because that’s who I was racing against and just try to harass him into a mistake. That actually ended up working out, I was surprised because he hasn’t really made any all season.”

With the third-place finish, King earns the driver’s school from Competition One at Blackhawk Farms, in a Formula Enterprises car.

“It’s going to be a lot of fun,” King said. “I’ve been driving the Spec Racers in the Hoosier Super Tour, but I haven’t driven anything this fast yet. That’ll be really exciting. I can’t wait to do that.”

It was winner-take-all in Global Mazda MX-5 between two drivers, DJ Alessandrini and John Allen, who had been the class of the field all season long. Both drivers had two wins each coming into the finale, with Alessandrini a scant four-point advantage. If neither were to win, it would come down to a combination of factors – but Alessandrini held a slim advantage if it came to that.

In a true heavyweight fight, however, Allen started on the race pole with Alessandrini just behind, with Allen leading through the early corners on the opening lap.

Four miles later, in turn one to open the second lap, Alessandrini took the lead; but that was again short lived. Allen went back to the point in Turn Five, and the battle was on. The two swapped positions several times in the battle for the lead.

The race got even wilder on the front straight to start the final lap, when Selin Rollan inserted himself into the race battle. Alessandrini opened the lap with the lead, leaving Allen on the attack. Rollan gave Allen a push to the lead going into Canada corner, setting up a final corner show down.

Alessandrini got to the inside in Turn 14 and the two made side by side contact, but Allen got the run up the front straight and to the checkered flag and the championship.

“We’ve had some races here at Road America in different leagues and you think the best thing to do is to sit and snipe the draft,” Allen said. “But once the lead pack was as big as it was, you don’t want to be succeptable to either of them so its worth it to just fight it out and see who is going to have to defend and attack and make life more complicated.”

With the win, Allen scores a package that includes brakes and rotors from Hawk Performance, a set of shocks from KONI, and an entry into the Tire Rack Time Trials Nationals Powered by Hagerty.

“DJ had a bit of an advantage in the bag on points, and he worked it to perfection,” the champion concluded. “He had the ability to stress me out by pushing the issue right away when I would have been happy to ride behind if there was a breakaway and get that draft at the end.”