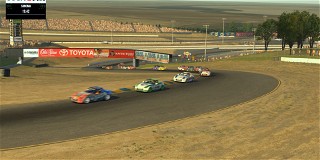 Round Four of the Hoosier Racing Tire SCCA eSports Super Tour ran on Thursday night from virtual Sonoma Raceway’s 12-turn, 2.52-mile road course. As always, the line between patience and aggression was a hard balance to find, but those who did saw the most success amongst a talented field of SCCA racers.

We all know that it’s impossible (ok – call it extremely, extremely difficult) to get physically hurt in iRacing. With that comes the knowledge that, especially early in the race, there may be some incidents as drivers jockey for position.

The best way to avoid those incidents is to be clear in the lead. Andrew Pallotta started the Formula 3 race on the pole and was in front of an incident that ended the day of Christopher Deshong and others on the opening lap, then ran away from the field to win by 5.018 seconds over Max King.

Pallotta and King were clear of the field for the entire 20 minutes while Grant Vogel battled and clawed his way to the podium in third when he forced Jake King into a mistake with just minutes to go in the race.

Nick Hemes and Jackson Macleod held their own battle just behind the battle for third, coming home fourth and fifth, respectively.

Of course, sometimes you position yourself to avoid an incident that never happens, behind a driver or two who never makes a mistake, and settle for a podium.

In the Global MX-5 Cup race, DJ Alessandrini, John Allen and Ryan Maloney lined up on the opening lap, took the lead, spaced out from the competition and waited to be able to capitalize on a mistake by another driver.

For 20 minutes they waited, all in a line, and when that mistake didn’t come, crossed the stripe in the exact same order.

Alessandrini took the win and held on to a narrow point lead over second place Allen, with Maloney remaining third in the point standings after four rounds.

The Hoosier eSports Super Tour continues next Thursday with another virtual West Coast round at WeatherTech Raceway Laguna Seca. Sessions begin at 8pm EDT and broadcasts stream live on Facebook and YouTube starting at 9pm EDT. Stay up to date on all SCCA eSports news on the eSports homepage, and never miss a broadcast by liking @SCCAOfficial on Facebook and subscribing to Sports Car Club of America on YouTube.