SCCA iRacers Take a Bite Out of Lime Rock 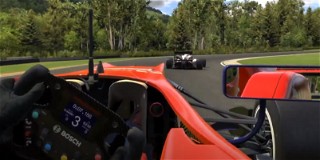 With the conclusion of the third week of competition, we are officially halfway through the second season of the Hoosier Racing Tire SCCA eSports Super Tour. This week’s event showcased the 1.5-mile 7-turn course at Lime Rock Park. The New England staple tested the virtual racers’ discipline as racing room was limited and margins were close.

Evan Rakusin led the field of 27 drivers to the green flag with Andrew Pallotta on his flank. In Turn 3, Pallotta and Caleb Patrie made contact, spinning both and forcing them to the back of the pack. Pallotta was able to make a strong climb back, finishing just outside the top 10.

It remained quiet for much of the race with Rakusin leading Max King and Paul Darling, until Darling went off in Turn 1 on lap 11. Two laps later, it was King who went off in Turn 1, but resumed and maintained his position in second. That off seemed to serve as motivation to him as he started a long climb back, getting within a second of Rakusin again, with two laps to go. It proved to be not quite enough though, and Rakusin cruised to an anti-climactic victory, promoting him to the points lead for the season.

Behind the lead pair, Kyle Herbst and Chris DeShong battled closely until lap 14 when Herbst got loose passing lapped traffic, causing a spin that ended his race. That promoted DeShong to third and Jackson MacLeod to fourth with Caleb Patrie completing the top five.

On the front row, John Allen nabbed the pole from Aaron Jeansonne by just 0.203 second. Fourteen cars qualified within 1 second of the pole, making this one of the tightest fields we’ve seen in the eSports Super Tour.

On the first lap, Allen took the lead heading into Turn 1, with Ryan Maloney sliding into second. Alessandrini and Jeansonne followed close behind. The four leaders raced nose to tail for several laps with only a few changes of position. On the third lap, Alessandrini advanced to second place over Maloney. Shortly after, Luke Pfeiffer caught the lead group, making it a 5-car race for the lead.

For most of the race, it was Allen and Alessandrini duking it out for the race win, but the three racers behind them continued to make their presence known. On lap 17, some lap traffic forced Allen off the line, killing his run down the straight and allowing Alessandrini to take the lead. As the lead pack worked their way around the traffic, Jeansonne overtook Maloney for third position. On lap 19, Maloney regained the position going into Turn 1.

After 21 exciting laps, Alessandrini crossed the finish line first, 0.194 second ahead of Allen. Maloney was just another 0.284 second behind. Jeansonne and Pfeiffer completed the top five.

The Hoosier eSports Super Tour continues next Thursday with a virtual stop at Sonoma Raceway using the 2.53-mile Full configuration with sessions starting at 8pm EDT and broadcasts streaming live on Facebook and YouTube starting at 9pm EDT. Stay up to date on all SCCA eSports news on the eSports homepage, and never miss a broadcast by liking @SCCAOfficial on Facebook and subscribing to Sports Car Club of America on YouTube.