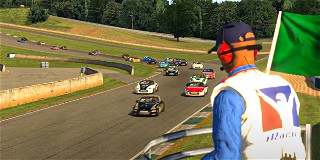 In the front row, it was a familiar sight with the same two drivers leading the field to green as last week at VIRginia International Raceway: Patrick Darling and Max King. Unlike last week where differing setups contributed to King’s eventual victory, the cars seemed evenly matched—until the lap 11. As the leaders navigated the Turn 10 complex, a slowed car appeared over the hillcrest under the bridge. It was too late for either to make an adjustment and King contacted the slowed car, spun Darling and both leaders were taken out of the race.

Immediately, Caleb Patrie was thrust into the lead with Andrew Pallotta close behind. As the race wound down, the two continued their battle—Pallotta taking the lead on lap 13. On the following lap, Chris DeShong caught and started battling with Patrie, allowing Pallotta to gain a small lead. With just two laps to go, DeShong and Patrie caught a spun car in Turn 5. DeShong avoided, but Patrie made small contact. Though it looked like his race might be over, Patrie was able to continue, retaking second place from DeShong as they headed into the last lap.

As they came down the hill one last time to cross the stripe, Pallotta took the win and points lead with a 3.017-second margin of victory over Patrie. DeShong crossed the line 1.233 second after, with Nick Hemes and Jackson MacLeod completing the top five.

The cars gridded up—much as you might expect—with the top 16 drivers qualifying within a second of each other. The polesitter, Jack Tranter, led for most of the first lap, but Michael Carter took over the position exiting Turn 11 as they came down the hill. From the seventh qualifying position, Selin Rollan made a strong charge to the front before spinning in Turn 10, collecting David Marcus and taking both drivers out of the race.

From then on, the race was incredibly clean. Carter and Tranter battled for the lead, but for the most part, the top five drivers stayed single file through the turns with some drafting and passing on the straights. The draft started showing its value on the seventh lap when DJ Alessandrini pushed Carter to the lead.

With three laps to go, Alessandrini picked up the aggression going into Turn 1 as the top five continued to battle for the lead. Carter led with Alessandrini and Tranter within a car length. John Allen and Mark Shrivastava stayed in the fight in fourth and fifth.

On the last lap, Tranter passed Carter on the back straight for the lead. As they came under the bridge, Alessandrini passed Carter on the outside to take over second place and that’s how they finished. Tranter’s margin of victory was a mere 0.251 second over Alessandrini with just another 0.222 second back to Carter. John Allen and Luke Pfeiffer completed the top five.

The Hoosier eSports Super Tour continues next Thursday, June 11, with a virtual stop at Lime Rock Park using the classic configuration with sessions starting at 8pm EDT and broadcasts streaming live on Facebook and YouTube starting at 9pm EDT. Stay up to date on all SCCA eSports news on the eSports homepage, and never miss a broadcast by liking @SCCAOfficial on Facebook and subscribing to Sports Car Club of America on YouTube.