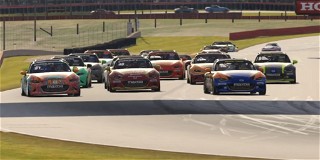 The first season of the Hoosier Racing Tire SCCA eSports Super Tour has concluded with its seventh stop, vising the heart of the country at Mid-Ohio Sports Car Course in Lexington, Ohio. This track is smaller, with a narrower track surface than some of the recent tour stops, forcing drivers to remain disciplined during the five 20-minute sprint races. The course could easily be described as busy, making for exciting racing as the inaugural season of the Hoosier SCCA eSports Super Tour concluded.

Information about the second season of the Hoosier SCCA eSports Super Tour will be announced soon. Exciting changes are coming including a new time slot, formalized points and high-stakes prizes.

The Spec Racer Ford class saw everything from tight packs to runaway leads in the first six weeks of the series. From the start, outside polesitter Jackson MacLeod got a great jump on the start to take the lead, closely followed by polesitter Steve Ray. Both drivers already had wins this season, but nobody had won two races in this class, until now. The two drivers ran within a second for the entire 20-minute race with Ray leading for most of the contest. In the last few minutes, MacLeod made several attempts at passes for the lead, but Ray held the position to claim his second win of the season by just 0.580 second.

Behind the two leaders, James Tibor held the third-place position for over half of the race, but a spin cost him two positions. Ryan Maloney took advantage and was able to hold off Justin Hall and a late charging Tibor to hold on to the final step of the podium. Tibor and Hall finished fourth and fifth, respectively.

In the second race of the evening, Paul Darling started from the pole in the T1 Porsche Cayman GT4s and took the lead as he dove into turn one, closely followed by Grant Vogel and Ken Houseal.  The trio spread three-wide down the straightaway heading into the Keyhole where Darling was once again able to claim the lead—with Houseal right on his tail. A mistake early in the race dropped Vogel back, allowing Ido Waksman to join the lead pair. After swapping positions a few times and staying very close for the entirety of the race, Houseal emerged victorious, with just a 0.146-second margin of victory over Darling. Behind them, Waksman hung on to third, finishing 1.566 seconds off the lead, but 14.310 seconds ahead of fourth place Marcus Luttrell, who had a great battle with Jacob Abrams in fifth.

On the same track at the same time, but with class leaders never seeing each other, the polesitter in the T2 Ford Mustang FR5000s, Mark Shrivastava, took an early lead and never looked back, claiming the class win by 4.661 seconds. Behind him though, Danny Richardson quickly overtook Ryan Field for second position with Chris DeShong and Max King following close behind. Those four drivers continued to battle for the remainder of the race, dicing and bumping for all fourteen laps.

At some points, Shrivastava’s lead shrunk to as little as a second and a half, but as the battle raged on for second through fifth, he was able to stretch that lead. An agricultural adventure down the back straightaway for DeShong with about three laps to go allowed King to take a comfortable margin in the second position. DeShong held onto the final step of the podium, with just a 0.397-second margin over Richardson in fourth. Field rounded out the top five, just 0.263 second back.

Before the green flag even dropped on this race, the field was tight as the top ten drivers qualified within one second of each other.  That close racing created some incidents early on. All drivers made it through the first turn cleanly, but heading into the Keyhole, Brian Farnum and Evan Rakusin touched, sending Farnum into the outside sand trap and forcing him way back in the order. Rakusin was able to continue, but Reece Everard took advantage and ran away with the lead. A spin in the same location farther down the order caused a large pileup, taking out several cars before the race ever got to turn four. Behind Everard, a train of cars began fighting for position and looking to chase down the leader.

By the halfway mark, Rakusin and Ryan Maloney had caught up to Everard, with polesitter Zachary Rivard leading a second pack which included Billy Davis, Justin Hille, Andrew Abbott and Jeremiah McClintock. That second pack eventually caught the leaders, but on lap 11, Maloney got a little loose under braking into turn four. That incident took Maloney out of the race and forced Davis and Hille to check up, taking them both out of contention for the win.

On the final lap, the lead pack of Rakusin, Everard and Rivard went three wide on the backstretch. Rivard got the position heading into Madness but contact with Rakusin sent Rivard sliding off the track. Everard took off with Rakusin right behind. At the finish line, it was Everard ahead of Rakusin by 0.145 second. Rivard was able to hold onto a podium position in third. Everard had multiple poles throughout the seven-week series, but this was his first win.

In this three-class race, there was a solid mixture of runaway victories and very tight racing. In the GT-1 Cadillac CTS-Vs, Andrew Aquilante qualified on the pole and led every lap on the way to a 14.731-second margin of victory. After the race, the nine-time SCCA National Champion admitted that he’s starting to get comfortable in iRacing now that Club and Pro Road Racing has been suspended for about six weeks, “What am I, like three and a half weeks into my iRacing here? It’s getting equipment sorted, getting settings felt out and I just got a new computer that helps me run a little bit higher frame rate and that smooths things out and it’s starting to click I guess. The Cadillac fits me a lot better than the Mustang does, that’s for sure.” Behind him. Mike Leeder claimed the second step on the podium with Arne Henriksen in third.

DJ Alessandrini started from the pole in the GT-2 Porsche 911 GT3 Cup cars and never looked back, claiming victory by 18.331 seconds despite a lot of traffic, managing the Cadillacs—which are faster in a straight line—and the front-wheel drive Audi RS 3s. Behind him, there was an exciting battle for the remainder of the podium between Christopher Paiz, Paul Slavonik, David Santel and Ellis Spiezia. Throughout the battle, the other classes had major impacts as drivers attempted to get a tow off of lapping Cadillacs or keep some distance from the Audis being lapped. At the end of the 20-minute race, Slavonic claimed second position with Santel in third. Spiezia settled for a close fourth place, with Paiz in fifth.

The race in the GT-3 Audis was much closer as Elias Roman and Darin Treakle ran together for most of the race. With about four laps remaining, Treakle ran into trouble with a couple isolated incidents that all but took him out of the race. Billy Davis was able to capitalize and rise to second position, with Andrew Ball close behind in third. That’s how they finished, with Roman’s margin of victory settling at just over a second.

The final race of the night was a nearly full field. The top five qualifiers were separated by just 0.2 second, setting the stage for an exciting 20 minutes of racing. By the third lap, the top four cars had broken away from the rest of the pack. DJ Alessandrini led over Ken Houseal, Justin Hille and John Allen. Those four drivers ran together for much of the race with a few passes, but for the most part, they saved the battling for the end of the race. With just two laps to go, the race got intense as Houseal took advantage of lapped traffic in Madness to run away with the lead. The following three drivers continued to battle cleanly until some contact between Alessandrini and Allen forced Allen out of the race. As those two sorted themselves out, Hille capitalized and took over second position.

Thanks to the late battle for second, Houseal finished with a 2.301-second margin over Hille who had just 0.336 second over Alessandrini at the finish line. Michael Gagliardo and Max King completed the top five after a great race-long battle of their own. This was the second consecutive win in the Global MX-5 Cup class for Houseal.