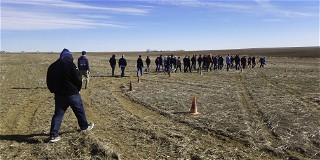 Some people walk willy-nilly around the course, talking with their friends and having a good time. While it may be fun talking to your friends explaining how you’re going to slide around one corner and pitch the car into the next, it’s really hard to focus on the course and what you’re doing. Some prefer to walk the course alone so they can really focus on and internalize the course. The one exception would be if you have a likeminded friend, so you can both focus on learning the course and discuss options.

Many people like to walk imagining they’re in the driver’s seat with the rest of the car out to the right, or left if in a right-hand drive car. Those folks walk close to the inside cones on the left-hand turns and a bit away from the inside cones on the right-hand turns. This gives them the perspective they would have when in the car and helps them visualize what they’ll be seeing once out on course during competition. Some people also like to walk the course as if they are the car with the perspective of being centered in the car. The important thing here is finding out what works for you.

Things you want to be looking for during your course walk are key corners you’ll really want to nail to maximize exit speed, optional sections where you can choose which way you want to go around cones, and areas of the course you might want to stay away from such as sandy areas or rocks.

For key corners you want to see which ones you can link together to maintain rhythm and speed through, or a series or corners with a straight afterwards where it might be a good idea to sacrifice a little speed on the first turn or two to set yourself up and maximize exit speed on the final turn onto a straight.  You may also find a tight corner at the end of a long straight that you want to make sure you brake early and set the car up properly for to make it cleanly through.  You’re basically looking for anything that might be tricky and might require a little more technique to maintain speed.

You may encounter optional sections, such as slaloms, where you can enter from either side of the first cone.  These will often have an advantage going in one way, but a different advantage going out the other.  Sometimes entering really flows well going to one side, but it has a really bad exit that way and you would never know this until it was too late on your first run if you didn’t walk the course first.  Be sure to make mental notes and really visualize going in the opposite way than what feels best to really gain speed and shave seconds off on exit.

Sometimes you’ll see areas of the course that will be soft or full of rocks that you might be able to avoid by taking another line.  You may also find areas that might be hard and tacky that may offer up a little better grip that’ll slingshot you ahead of your competitors!

Walk the course two or three times, and walk back and forth on “key” sections a couple times each to really get to know them. Visualize them so you can go over them in your head before you make each run.

If you’re one of the first people out on course for the first runs of an event, the course walk could be critical in figuring out how the course flows before the lines are worn in. Sometimes it’s hard to read the cones quickly enough while going full competition speed and you could get off course, making the course walk all the more important before a first run.

If you’re in a very competitive class where places are determined by only a couple seconds or less, shaving seconds off seconds on your first run by doing a well-planned and focused course walk could easily mean the difference between standing on the podium or watching your competitors on the podium from the crowd!