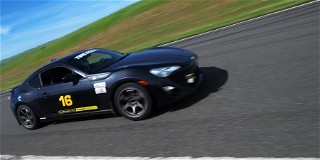 There will be a lot of firsts for the newly revamped SCCA® National Time Trials program this year, and this last weekend was no exception. For its first stop, the Tire Rack SCCA Time Trials National Tour presented by Hagerty headed west to Thunderhill Raceway in Willows, California. While the pilot program made a few stops last year, this was the first time the program traveled west of the Mississippi to visit the Golden State --which lived up to its name, and then some.

The weather could not have been better for participants. With golden rays shining down, drivers from all areas of the Club, and some from outside of it, took to the track to experience the SCCA’s reimagined and revitalized National Time Trials program. Ron Bauer showed up in his SCCA Solo® National Championship winning BSP Miata, on street tires, to run in Max 3, while the dynamic couple of Tony Rodriguez and Youmna Zalzal battled it out in Tuner 4 alongside Reed Gibson. Bernie Novak, a scrutineer for the San Francisco Region, ran a Spec Miata in Sport 4, while Club racers Brian Duddy and Hank Raymond worked to out run each other in the Sport 6 class.  Time Trials veterans Kaitlyn Lydell and Tony Brakohiapa (top time overall) were also in attendance, proving that the new program is a place for everyone, and a good time for all!

Each Tire Rack SCCA Time Trial National Tour stop will be a two-day event, with a party in the middle. With competitors arriving on Friday to tech and check in, the event got underway on the two-mile West Course Saturday morning with two lapping sessions used to get acquainted with the track layout.  Competition commenced after lunch with the first of two Track Sprints that focus on only a portion of the track and operate much like a hill climb. Consisting of a standing start and a flying finish, each competitor got three attempts to put down their best time. With competition for day one in the books, all competitors made their way to the all participant party, sponsored by Hagerty, where great food was served, delicious drinks were drank, and the racing switched from on track to the bench variety.

The second day kicked off with two, 20-minute Time Attack sessions in the morning, giving each driver two opportunities to knock out their best full lap of the event. In the afternoon, the schedule switched once again to a Track Sprint, but this time with a twist. Instead of running the selected portion of the track in the normal direction, drivers were presented the unique challenge of running it the opposite way, a first at Thunderhill Raceway.

As competition on day two came to an end, competitors and participants gathered together to congratulate one another and collect awards. And while there were many class winners, which you can find by here, the top Superlative honor went to San Francisco Region member Joe Novak. Joe, who not only worked as Chief of Tech but also saw to his wife Bernie’s every need as her crew chief, was awarded the Spirit of the Sport -- or the “this guy gets it” award -- for his enthusiasm for the event, its participants, along with his approachable and welcoming interactions with all who came through the tech line.

With the Thunderhill Raceway event concluded, the Time Trials van turns around and heads east to Pittsburgh International Race Complex, in Wampum, Pennsylvania, on April 27-28th, before turning south to hit Carolina Motorsports Park on May 25-26th.  To find the rest of the schedule, and to get signed up for the event nearest you, follow this link.