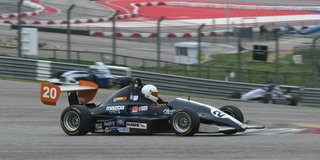 AUSTIN, Texas (February 9, 2019) – Texas isn’t immune to the bitter cold that has invaded most of the country, but despite the temperatures in the 30s and rain on Saturday at Circuit of the Americas, the SCCA Hoosier Super Tour hosted by the Lone Star Region continued on.

Those wet, cold and slowly drying conditions were a factor right away on the 20-turn, 3.427-mile circuit.

Five-time Hoosier Super Tour runner-up Breton Williams started on the front row in the No. 52 Breton Williams Racing/First Wealth Financial Group/G-Loc Brakes/Hoosier Mazda MX-5. Unlike competitors Matt Reynolds and James Rogerson, Williams elected to test the track conditions on Hoosier rain tires. After following Rogerson’s BMW for the opening lap, Williams slipped by and began to open up a lead on Reynolds.

That lead grew when Reynolds, a three-time National Champion, spun twice on slicks. But by the second half of the 25-minute race, Williams was searching for water to cool his tires while Reynolds looked like he could make a race of it.

Williams did enough to keep a gap, however, and cruised to his first career Super Tour victory by 19.278 seconds.

“It was wet, and I had more traction because we made the right tire choice,” Williams said. “As long as I could stay in the water, we could keep pressing on. It feels great. We’re tired of coming in second, but we have yet to beat a National Champion in the dry. That’s the mission.”

A nearly identical situation occurred in group two, where David Fiorelli made an identical choice to Williams in Super Touring Under. Fiorelli jumped to a big lead in his No. 190 Subaru BRZ, and then held on as the track continued to dry and the field came back to him.

“It was a really tough call in that race because we had drying conditions out there,” Fiorelli said. “I went out on rains, and my competition went out on slicks. I built a big lead, but by the end here they came. So it was a close race, a good clean race.”

With the track dry but still frigid for the start of the Spec Miata race in group four, a couple of veterans were able to put on a battle. Jim Drago and Danny Steyn started on the front row, survived some slight contact in the front of the field, ran in a line with Steyn poking a nose in front on at least one occasion, and came home just 0.229-second apart at the checkered flag. In the end, it was Drago’s No. 2 East Street Racing Mazda Miata in front.

“It was a good race,” Drago said. “There was a little contact in Turn One. I got sideways, I think Danny got hit, and after that it just sorted out. I tried to drive consistent laps. Midway through the race, Danny tried me at the end of the straightaway and I did the over/under and passed him back.”

Darryl Wills had a fantastic return to auto racing after a three-year sabbatical. The former Formula Mazda National Champion had taken a break, but came back at COTA with a win in Formula Mazda and a runner-up in Spec Racer Ford Gen 3.

“It’s a three-year layoff,” Wills said. “I did some other things, but you miss it. I’ve been racing something since 1974 and this is the first time I’ve laid off. I’m really happy to be back, and see all the familiar faces. It’s fun.”

Saturday concluded with a first-class participant party at Circuit of the Americas, where volunteers, friends, drivers, crew and family came in out of the cold for food and drinks. On Sunday, racing begins again at 8:30 a.m. local time with 14-lap or 35-minute races. Follow all the action live at www.scca.com/live.

Below are provisional race results from Saturday’s Hoosier SCCA Super Tour from Circuit of the Americas with Class: Name, Hometown, Region and Car.