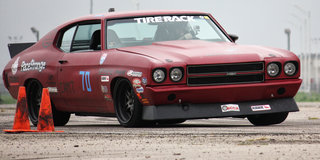 Saturday morning drivers were greeted with heavy fog and moderate temps. But by midday, the sun had started to burn off the fog. The course was wide open in the first half, with a few higher-speed ‘sweeper’ turns and a slalom to contend with. The second half of the course was technical and required patience and attentive brake patterns. In the CAM-C and CAM-T classes, it became clear early on that the Chevrolet Camaros were going to favor the course more than the Ford Mustangs. The heavier and longer wheel base Camaros and MOPARs seemed to tackle the course with less drama than the smaller and more nimble Mustangs, but almost all cars were challenged to hold traction at the finish line with a sharp turn-in at the checkered flags.

By mid-morning, the newer Camaros were, in fact, dominating the CAM-C class with six of the top eight spots being held down by 2017 or 2018 Camaros. The two Mustangs fighting for the leader board were being wheeled by Dave Feighner and Randy Atkins. But in the end, Alexander Doss would be first place in his Camaro.

On the heels of the CAM-C cars, the CAM-T class went out to prove it doesn’t matter how old a car is, you can build them and wheel them to keep up with the new kids. This grid had its Camaros, but it also saw a Dodge Challenger, Plymouth Barracuda, Ford Ranchero, Chevrolet Chevelles, and a Chevy C-10 pickup in a Skittles bag of colors. The competition was intense and a thrill to watch. In the end, the class was dominated by Matthew Braun in a 1970 Chevrolet Chevelle for most, if not all, of the day. Chasing Matthew and giving all CAM-T drivers a run for their money was Donny Freise in a ’71 Camaro and Mike Trenkle in his ‘Bomber’ widebody Mustang.

CAM-S was mostly dominated by Chevrolet Corvettes from C2 through C7, but there were a few Pontiac Solstices joining the fray. As with the CAM-C class, Chevy took the top spots throughout the day and kept their reputation as a formidable autocross platform. With so many Corvettes running, the competition was as close as it gets with less than a second separating the top drivers in the class by end of Saturday. When the last of the runs were tallied, Mike Losert took top spot in a 2002 Corvette with Ryan Finch and Alex Tziortzis a combined half-second behind in their 2002 Corvettes.

It goes without saying that these events cannot happen without a lot of work and volunteers. This year’s Tire Rack CAM Challenge East was hosted by the Indy Region who always goes above and beyond to think of every need and ensure all drivers participate in a smooth-running event. Additionally, we had 44 cars running an indexed class – all in trade for working the event from sun-up to sun-down for the event and the Friday Test and Tune. Saturday had Robert Lewis taking the top “Index” spot in his 1965 Mustang.

As is customary at CAM Challenge events, everyone joined for dinner on-site and enjoyed an Italian feast provided by sponsors. During dinner, there was a raffle where cool swag from Wilwood, Detroit Speed and Speedway Motors where given out, as well as big prizes from Wilwood Brakes, Forgeline Wheels and K&N/Spectre Performance.  Additionally, Brian Regganie was deemed worthy by his peers of the Rosco Racin’ Spirit of CAM Award which includes free attendance at an Evolution Performance Driving School.

Sunday morning challengers arrived at Grissom faced with sunshine and moderate temperatures, with a mind full of ways to improve. The competition gets a fresh start with drivers strategizing on ways to get their times into the top 16 so they can advance to the afternoon shootout.  The competition did not disappoint; with every lap, drivers were bumped in and out of the top 16 and all eyes were focused on the clock as each driver tightened up lines, smoothed out acceleration and avoided the dreaded cones.

The Shootout was nothing shy of nail-biting, drivers were often separated by thousandths of a second, requiring the announcer to do quick math to determine who would move on. The spectators were captivated, and the cheers and groans were audible when friends and co-drivers came skidding through the finish – in or out. In the end, the grid would see an all-red, all-Chevy lineup consisting of Finch’s ’02 Corvette, Doss’ ’19 Camaro, and Braun’s ’70 Chevelle.

What makes a CAM Challenge event so interesting equates to why the CAM class was created in the first place. You never know who will win and it’s often the car that you think has the least chance of coming out on top. This year’s CAM Challenge East had just this occurrence. With a wheel base that is close to the 2018 Camaro but exceeds the Corvette by eight inches, the 1970 Chevelle wheeled by Braun took the top spot in the end.

Overall, the CAM class continues to grow, bringing new and innovative drivers and cars. The CAM Challenge events specifically are now the largest muscle car-only autocross events and the sky is the limit for the CAM Invitational at Nationals.

Photo and words by Suzy Bauter