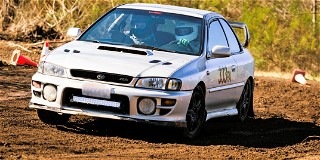 If you’re reading this, chances are something about rally racing has interested you. Was it photos of rally cars throwing waves of gravel? Or stories of race cars speeding through forests? Or maybe it was videos of cars tearing up mountain roads? Have these things left you wondering what rally is all about? Where it takes place? How you can watch? Or maybe even race?

The easiest way to learn about rally and have a blast at the same time is to attend an SCCA® RallyCross® event. Not only will you get to enjoy a day of watching racing, you’ll find a welcoming group of enthusiasts that are eager to share their knowledge of the sport. Questions about rally are always welcome, no matter how uninformed they may be. After all, the people answering the questions once asked the very same things.

Of the many types of rally, RallyCross is raced most frequently, making it easier to find and far more accessible than all other forms of rally. If you’ve attended a sports or stock car race at a racetrack before, RallyCross might not be what you expect. While RallyCross is just as organized, it’s much less formal than races at established racetracks. Instead of stands surrounding a permanent race circuit, RallyCross is typically raced in undeveloped dirt fields and the people in attendance are mostly the racers, their friends and family.

Not only are RallyCross races more accessible than most forms of racing, they simply aren’t as loud. Almost all the cars have street legal exhaust and they race one at a time against the clock, not in groups against each other. The result is an environment where your questions can be heard and answered.

The atmosphere at a RallyCross race is not only welcoming to the uninitiated, it’s welcoming to people of all backgrounds and experiences. Many people that participate do not come from motorsports backgrounds, nor were they raised in racing families. You’ll find diverse groups of people that have found their way to rally through friends and acquaintances, as well as exposure to rally media. Some people find out about rally simply by driving by a RallyCross race and stopping to ask what’s going on. In just a few minutes, they find themselves hooked on a new sport they never even knew existed.

If the reasons above haven’t convinced you to come check out a RallyCross race, how does taking a lap in one of the race cars sound? While that might seem too good to be true, it isn’t. At almost all regional RallyCross races, riding along for a lap is just part of the day’s fun. Competitors are more than happy to share the excitement of driving at speed with those that are interested in learning about rally. Simply ask somebody to point you to the race organizers and they’ll gladly set you up with somebody offering rides for the day.

Whether you just want to watch or are considering racing someday, the best way to get involved is to simply find your local region and attend one of their RallyCross races. And since the racing season is just getting started, this is the best time of the year to go!

You can find your nearest SCCA region here: https://www.scca.com/regions.