Justina and Zelda: A Perfect Match 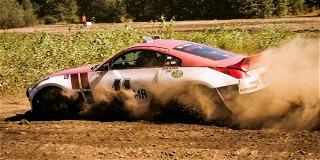 Sometimes, no other car will do. When Justina Brockmöller decided to compete in RallyCross®, she knew exactly which car she wanted to race. Unfortunately, it was being raced by somebody else on the other side of the country. She explains, “I first saw Zelda, named after F. Scott Fitzgerald’s beautiful but troubled wife, on social media. As a Nissan fanatic that loves all things rally, seeing one run RallyCross in BRE livery made my heart swoon. I became social media friends with her owner, Shawn Hart, so I could follow along with her racing adventures. Almost as if on cue, Shawn put her up for sale.”

Brockmöller bought a plane ticket immediately. “I packed a bag, grabbed my dog, and flew from Washington State to New Hampshire. When I got there and saw Zelda in person, it was almost overwhelming. She was perfect, though finalizing the sale was a bittersweet moment. Shawn kissed her goodbye and I promised him that she would continue flinging dirt and gravel on the West Coast.”

The cross-country drive back to Washington was challenging but rewarding. Brockmöller, who will soon graduate with a degree in automotive technology, laughs as she recounts the trip, “It was snowing when I left and the blower motor was disconnected due to an electrical issue. It was a long, cold drive, but it was filled with smiles and thumbs up from countless people.”

“After a few repairs, including a new driveline and clutch, Zelda and I were ready for our first RallyCross together. It was a muddy affair and we were all over the place. Real power and rear-wheel drive on a slick surface was definitely a blast, but also very challenging. It made me determined to master the art of racing RWD in RallyCross.”

With a few races under her belt, Brockmöller’s race craft has progressed. “I still have a lot to learn, but each RallyCross teaches me something new. At one event, a minor mechanical issue plus a few mistakes on course resulted in my first DNF. It was embarrassing, but also positive, because sometimes mistakes teach the best lessons. I learned how to pick my lines better and what spares I need to bring on race day.”

“The long-term goal for Zelda is stage rally. That journey will be a long and bumpy road, but I can’t think of a more exciting car to travel it with.”