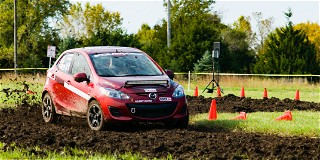 DirtFish Rally School instructor and stage rally veteran Michelle Miller recently competed at the 2017 DirtFish SCCA® RallyCross National Championship at Heartland Park Topeka. Though Miller has won three National Championships in Solo®, this was her first National RallyCross. After all was said and done, she offered up some thoughts on competing on dirt, racing patiently and borrowing race cars.

Q: The weekend featured three courses, two for Saturday’s runs and then a combination of parts of those for Sunday’s runs. What did you think of that format?
A: “I like the three-course format as it rewarded focus and each course had something a little different to help equalize cars with raw power versus those with good handling.  It’s nice at a national event to have the courses be a little harder.”

Q: Saturday’s thunderstorm dropped quite a bit of rain overnight. Do you have any tips for drivers competing in similarly changing and challenging conditions?
A: “Sunday morning was certainly something to experience and the mud was really very fun to drive at speed. It rewarded drivers that were comfortable driving sideways with the car moving around underneath them. As we emphasize at DirtFish, vision is always key. Your hands and feet follow your eyes and the car follows your hands and feet. The other thing that is important in challenging conditions is patience. Sometimes you just have to wait a tick to let the car do some work. This is very difficult in a racing environment when a lot of the action in the car feels fast.”

Q: What was competing in a borrowed car like?
A: “It’s always fun competing in somebody else’s car and it appears this is how I deal with not having a dedicated RallyCross car. I like the challenge of getting into something new, getting in a couple practice laps and then heading out to compete. I think the variables help develop well-rounded drivers. At DirtFish, we see drivers from all disciplines, stage rally, RallyCross, road course, UTV, etc. The ability to conquer lots of different conditions, speeds, drivetrains and handling characteristics makes drivers more adaptable and capable of extracting the most out of whatever vehicle they’re in.”

Q: Overall, what did you think of the competition?
A: “The people make the party, right? Like most racing, the RallyCross community is a great group of people who are excited about their sport and its friendly competition. I was happy to be welcomed into their fold and they really made the event what it was. Their appreciation and recognition of DirtFish as the title sponsor for the series was great to see as well.”